Apple Pie for the Holidays
with Executive Chef, Brian Alberg of The Red Lion Inn 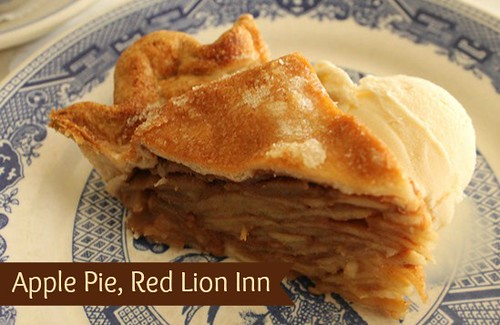 Apple Pie is an American staple. First brought to the colonies in the 16th century, the pie has gone through several alterations over the centuries to become one of the most popular desserts in the country. There are almost unlimited ways to create an apple pie and Executive Chef Brian Alberg of The Red Lion Inn in Stockbridge, MA, has an Apple Pie recipe that is delicious!

Based on an original recipe from the family who has owned the Inn for over 40 years, this Apple Pie has a crisp, buttery crust and delicious filling. Owner of the Inn, Nancy Fitzpatrick provided some insight into today’s recipe…

“The recipe is based on my grandmother, Mary Pratt’s apple pie, and was the pie my mother (occasionally, for company) made when I was growing up. I remember hearing that when we first opened, Nana May (as we called her), went out to the kitchen and showed the chef how she made her pie. She was a wonderful cook. There was always dessert at her house. My grandfather had a huge vegetable garden that she made great use of.”

Nancy’s Mother and Father, Mrs. Jane Fitzpatrick and her husband, Senator Jack Fitzpatrick, acquired The Red Lion Inn in 1968. The Inn is now run by Nancy’s step-daughter, Sarah Eustis. This Apple Pie recipe is currently in the very capable hands of Executive Chef, Brian Alberg who has been with the Inn for 10 years.   They have graciously shared their recipe with Hilltown Families, passing down a family recipe from theirs to yours for the holidays:

(From The Red Lion Inn Cookbook; Featured on HilltownFamilies.org)

About The Red Lion Inn

The Red Lion Inn (c. 1773), a charter member of Historic Hotels of America, has been providing food and lodging to guests for over two centuries, is located at 30 Main Street, Stockbridge, Mass. For more information, contact 413-298-5545, or visit www.redlioninn.com.