PARENTS’ NIGHT OUT: Win Tickets to see Dar Williams at the Calvin Theatre 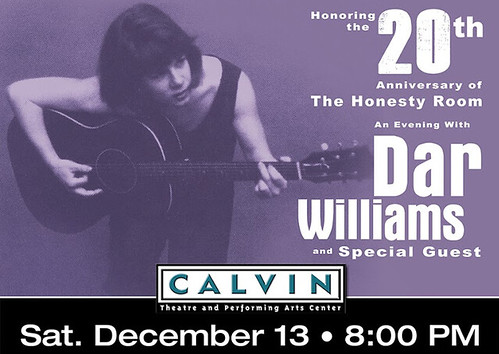 Enter for your chance to win! You pay for the sitter and we’ll pay for the tickets! Dar Williams revisits the album that struck a chord for a generation 20 years ago, Saturday December 13th at the Calvin Theatre. Jill Sobule opens.

Continuing our fall promotions, we are pleased to offer a chance to win one of two pairs of tickets to see Dar Williams, at the Calvin Theatre in Northampton, MA at 8pm on Saturday, December 13th, 2014.

Win tickets and take your spouse, partner or good friend for a night out. Deadline to enter to win is Tuesday, 12/9/14 by 11:59pm (EST). More details below.

In today’s music landscape, the impact of introspective and honest lyrics across a full album is often lost at the expense of the single or a viral video. But in the early nineties, Dar Williams’ The Honesty Room struck a chord and captured a moment in time: A rare time in music when the listener was as likely to hear Tori Amos on the radio as Nine Inch Nails and honesty/raw emotion was paramount. Lilith Fair sold as well as Ozzfest and strong songs were more important than image or anything else. Lyrics still came with an album and people connected on a very personal level with a variety of themes and experiences detailed painstakingly on albums like The Honesty Room and more.  Twenty years later, The Honesty Room endures, carrying with it an unparalleled legacy and an enduring sense of optimism. Dar Williams performs The Honesty Room in full at 8PM on Saturday December 13th at the Calvin Theatre. Jill Sobule opens. Special guests are anticipated. — www.darwilliams.com

We’re giving away two pairs of tickets. Your chance to win a pair of tickets to see Dar Williams, at the Calvin Theatre in Northampton, MA at 8pm on Saturday, December 13th, 2014, is easy & simple! To enter to win simply fill out the following and we’ll  randomly draw two winners from all who enter (one entry per household).

One Comment on “PARENTS’ NIGHT OUT: Win Tickets to see Dar Williams at the Calvin Theatre”