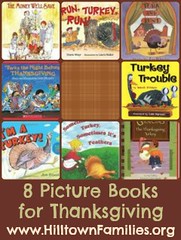 Turkeys are part of our living landscape. We see them almost everyday throughout the year. In spring, we admire the big toms displaying their feathers in full regalia, and in summer, we delight in the fuzzy babies wobbling after their mothers. We watch big flocks pecking in stubbled cornfields during fall, and in winter, we follow their claw marks in the snow, hoping to find one of their long, magical feathers. We can’t help but mimic their gobble gobble, and are always surprised to see their plump bodies fly up into the trees to roost. A symbol of the Give-Away, the turkey carries historical and cultural significance, and for many, is the epicenter of the Thanksgiving feast. But in these picture books, there are no roasted turkeys. These birds aren’t dressed with stuffing and chestnut glaze, but instead wear ridiculous costumes and hatch crazy ideas to escape human plates. Vegetarians and non-vegetarians alike will appreciate the comedic feast and avian affection found in these eight picture books, where talkin’ turkey means keeping your tail feathers.

Gracias, The Thanksgiving Turkey. As Thanksgiving approaches, Miguel worries that his truck-driving papa may not make it home for the holiday. He also worries his pet turkey may become the main course. Ever since papa sent Miguel the baby turkey to fatten up for Thanksgiving, Miguel has grown attached to it, taking it for walks around New York City, finding it when it is stolen, and even having it blessed by a priest. Will papa make it home? Will Miguel’s turkey be Thanksgiving’s main course? A sweet story with a satisfying ending leaves Miguel a lot to be thankful for.

Run, Turkey, Run. Thanksgiving is a day away and the farmer is coming for Turkey. Turkey tries to hide, but when the farmer doesn’t fall for his tricks, there’s only one thing left for Turkey to do – run! The catchy, repeating line and comical illustrations will delight young gobblers and have them rooting for Turkey’s safety.

Turkey Trouble. When Turkey fears he’s the holiday meal, he pretends to be a horse, cow, pig, sheep, and rooster by donning ridiculous costumes and props. But the animals always recognize him. Then Turkey finds his best disguise yet. Will it convince the farmer to forgo the Thanksgiving bird? Humor, word play, clever puns, fun-to-say animal sounds, and hilarious watercolor illustrations will have youngsters asking for a second helping.

‘Twas the Night Before Thanksgiving. Adapted from Clement Moore’s iconic poem, this version tells the tale of a field trip turned rescue operation. When a group of students take a trip to Farmer Mack Nugget’s farm and realize the turkeys are intended for a singular doomed fate, they take matters into their own hands. A wacky Thanksgiving story served with hilarious watercolor illustrations.

Sometimes It’s Turkey, Sometimes It’s Feathers. This story was originally published in 1973, then re-released in full color with illustrations by the author’s daughter. When Grandmotherly Mrs. Gumm finds a turkey egg, she raises it herself, thinking the bird will become a delicious feast. But as Thanksgiving approaches, her dinner plans turn out much differently than she anticipated. A tender, happy ending brings holiday cheer to this classic story.

Turk and Runt: A Thanksgiving Comedy. Turk is destined for greatness. His parents are sure he will definitely be chosen. His little brother, Runt, knows otherwise. Here on Wishbone Farm the only thing Turk will be chosen for is the main course at Thanksgiving. Runt tries to warn his family, but they just won’t listen, until Runt is marked for Thanksgiving dinner himself. Family dynamics and sibling rivalry add to the comedic feast, as do the pen and ink watercolor cartoons.

The Money We’ll Save. When Pa brings home a turkey poult, he assures his wife and family they will save a heap of money by raising their own Christmas turkey. But it’s not easy to keep a growing and willful turkey in a 19th century tenement apartment in New York City. As each new problem arises, from grumbling neighbors to the added expense, Pa comes up with brilliant ideas to overcome each difficulty. But Pa’s final solution saves more than the Christmas holiday. A lovely and heart-warming story with wonderfully expressive paintings, this is a picture book to savor.