The Ripple: Rivers Can Fly

Posted on November 24, 2014 By Hilltown Families

The Importance of Flying Rivers 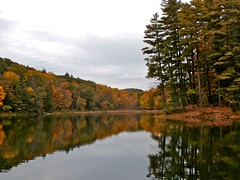 Flying Rivers have receded in the Amazonian rain forests but can be seen around our very own Mount Tom! However you won’t see them in Fall. Wait for a humid August day, and you’ll have more luck.

Perhaps you’ve heard that California is experiencing a very severe drought caused by climate change.  Since most of our fruit and vegetables are grown there, now is a great time to become knowledgeable about our regional food system, and to redouble support for our farmers who can supplement the shrinking Californian supplies. Compared to the rest of the nation, we’re lucky to have such a vibrant and energized agricultural base. A few years ago, a study was done to see if Northampton could grow enough food to supply its own population; and the answer is—if everybody’s vegetarian—”yes.” What good news!

Locally produced food is often more expensive than factory-food shipped from far away, and wisely invested. As factory-food systems like California’s break down due to the costs and failures of fossil-fuel and pesticide inputs, over-complexity, and global warming, our food supply will remain as lively as it was before the turn of the last century (when there were no such inputs). Factory farming never made it to our Happy Valley and Hilltowns because it requires unpopulated plains which are turned into industrial grids and assembly lines, as in the Midwest and central California. We are lucky (I’ll say it again); every day I’m grateful to live in a rain-blessed place with good soil and so many people who grow food. The word “agriculture” has the word “culture” in it (agri means “field”), and as our reliance on distant food sources decreases, we will live in an increasingly healthy “culture.” The signs of this health are all around us, already.

Less lucky are people who live in China, India, Iran, Australia and Brazil: nations also experiencing severe droughts—and like us, over-pumping finite groundwater reserves to keep factory-food production levels up. Every morning, I do a quick online search of the word “drought” to try to understand how global warming is affecting biomes around the world; and of all the drought-stricken places on earth, none is as disturbing as Brazil.

When we think of Brazil, images of beaches and carnival pop into our heads—and so does the Amazonian rainforest. What is so disturbing about the drought in Brazil is that the link between deforestation and the loss of rainfall is undeniable. Here is a map that shows how much deforestation is occurring; zoom in on Brazil, and see that the trees of the Amazonian rainforest are going, going—gone: and very recently, too.

Brazil has South America’s most booming economy, a boom based on the destruction of the rainforests. We all know this story: forests are clearcut and the land is used for factory cattle and GMO soybean operations, or massive hydroelectric dam complexes. What is new about this story is the appearance of an epic drought in Brazil, which is threatening their economic boom—because without water the cattle and soybeans die, and the dams and the big cities don’t work. It looks like Brazil’s economic boom will soon go bust because they clearcut the rainforests. That snake is biting its tail.

So beautiful, this reality of flying rivers—and we have them here. I’ve seen them, and I bet you have too, but we didn’t have the phrase to describe them with, so we could share our perceptions of them. Flying rivers: I always called them “dragon’s breath.”

Wet mountain forests steam in the stifling heat of August; mists updraft and lift from the trees of Mt Tom and Mt Holyoke for all to see, who take time to notice. It’s the same mist that invites moss and lichen to grow on trees, roofs and boulders; and when it’s most drippy and warm, tree frogs sing like Elvis and Patsy for their own true love. All the creatures whose close ancestors once lived in the sea, like slugs and snails, amphibians and reptiles, find land travel’s easier when the river is flying.

Breathe into your palm; and for a moment meditate on how flying rivers are exhalations. Until their lungs were surgically removed, Amazonian mountains breathed vast amounts of steam into the sky everyday, more volume of water than flowed in the Amazon River. It was a circular breath, cued to hot day and cool night: exhalation in sun, inhalation at night. When the rainforests vanished, the clouds drifted away and haven’t returned, and maybe never will. Where the rainforests were, there are winds but no breath; & the winds and rivers are dry, and so are lakebeds for reservoirs and hydroelectric dams.

Our forests are big and wet and so our mountains breathe—that is what I wanted to tell you in this post. No, wait, this is what I wanted you to visualize: trees make rivers. Flowing and flying rivers, in your own town!