Posted on November 12, 2014 By Hilltown Families 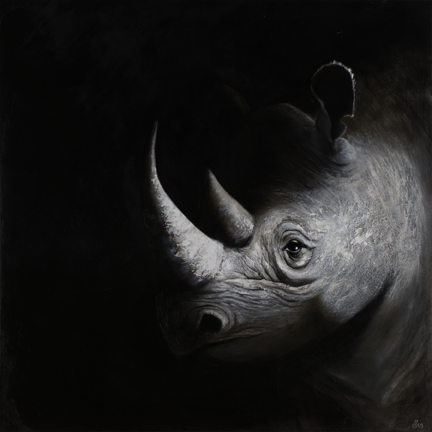 Animalia: The Endangered at the Hampden Gallery, celebrates the artist’s keen understanding of the life force embodied in these majestic animals. Siebel paints these intimate oil portraits of endangered species, wherein the being-ness of each animal shines forth. Melting into a deep shadow that holds the animal like an embrace, the darkness swallows form and place, and stands in for context. With each stroke of the brush, Seibel champions for the rights of these animals to simply be. The artist reminds us…the animals are disappearing.

This November, UMass Amherst’s Hampden Gallery hosts an exhibition by the multitalented Dawn Howkinson Siebel, perhaps best known for her painted and batik-dyed silk kimono collection sold at Bergdorf Goodman in the ‘80s, and more recently for her Better Angels series, in which she painted over 300 individual portraits of New York City firefighters who served on September 11, 2001 on burnt blocks of wood. Of Better Angels, she says the project evolved from her desire to “create something positive in response to something terrible.”

Her FAC show, Animalia: The Endangered, is a timely follow-up to that work: one that will hopefully spark a positive, urgent response in viewers to an ongoing environmental disaster. “Over 40 percent of all species on Earth are threatened with extinction,” Siebel says. “The ‘threatened’ classification includes 2129 Critically Endangered, 3079 Endangered, and 4728 Vulnerable animal species – and counting. These numbers are two to three times higher than they were only fifteen years ago.”

Turning her eyes–and brushes–to the natural environment, she presents intimate portraits of endangered animal species. These richly detailed paintings put a “face” to each species and encourage viewers to think critically about the probable permanent loss of these unique beings. Siebel’s choice to paint close-ups of each animal’s head and face directs viewers to look at them as people, or as equally valuable beings, so that the gravity of the endangered species’ plight resonates more deeply.

What do you notice about the artist’s compositional choices: what colors does she use? How does she treat the negative space around her subjects? How true to life are her paintings? What can you infer based on those observations? What message do you think she is trying to send, and do you think she is successful?

The show will be on view between 1pm-6pm Tuesdays through Fridays and 2pm-5pm Sundays from Sunday, November 9 to Tuesday, December 2, 2014. An opening reception will take place on Sunday, November 9 from 2pm-4pm. The exhibition and reception are both free and open to the public.

← What Strengthens Your Sense of Place and Community Pride?
Suggested Events for November 15th-21st, 2014 →