Posted on October 29, 2014 By Hilltown Families

Statistics Have More Meaning When Pulled From A Greater Context 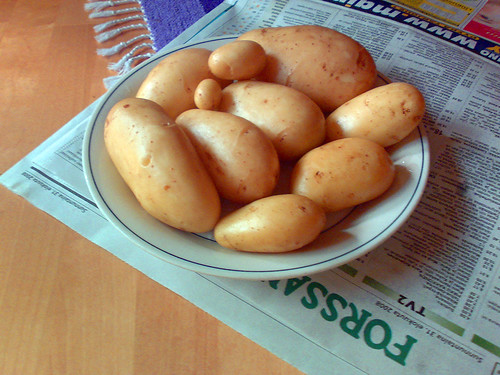 How many potatoes will Britons eat over the next 3 minutes?

Have you ever wondered how much humans consume, how far we travel, or how long we spend on certain activities? If you’ve ever driven by a landfill or watched a trailer of food getting unloaded at a grocery store, you certainly might wonder about the amounts of things being transferred, consumed, and perhaps eventually recycled or discarded. Families who have traveled on planes or trains may have wondered at times about the speed at which they’ve moved or the amount of fuel that it takes to transport them.

Quantifying all of these questions (and countless others) is a fantastic way to provide context for children’s budding math skills. Encompassing all four mathematical operations (addition, subtraction, multiplication, and division), basic statistics and data collection allows children to understand not only how to calculate rate and collect information, but provides them with a meaningful context for the mathematical concepts that they learn. By embedding math skill development in studies of everyday life, we can provide children with a reason to learn to understand when to divide or multiply, and when to add versus subtract.

To introduce the idea of statistics to children, have a look at Rowland Morgan and Rod Josey’s In the Next Three Seconds, an easy-to-read book that teaches readers not only about statistics, but also about ways to conceptualize large numbers. The book groups statistical information together based on how many times things happen (or how much of something is used) in a certain amount of time – three seconds, three minutes, three hours… all the way up to three centuries and three million years! We learn in the book that in the next three seconds, ninety-three trees will be cut down in order to make liners for disposable diapers, and that three million years from now, the space probe Voyager will finally make its way out of the Milky Way Galaxy.

While such calculations may at first seem implausible to children (who is in charge of counting the trees cut all around the world during a three-second window, anyway?), but after some discussion, children can be helped to understand that these statistics don’t represent literally what happens every three seconds (or minutes, hours, years, etc.), but they are the mathematical result of breaking down numbers and spaces of time into statistically accurate, easy-to-understand facts. They are averages of a sort, creative (but mathematically sound) re-conceptualizations of numbers that make information easier to understand and conceptualize.

For further practice, try creating your own book that includes statistics about your family and/or community. Tracking data on everything from the number of times you blink in a minute to the amount of plastic containers recycled every month can lead to some interesting mathematical discoveries about your habits. Weighing a family pet could allow children to speak about their family’s cheese consumption in terms of cat-weights, while tracking the amount of precipitation in a year could lead to facts that speak of the amount of juice consumed by your family using not gallons as a unit, but years’ worth of rainfall instead. Pairing your calculations with measurements of the length of the family car could lead to some interesting statistics about how many car-lengths worth of paper (lined end to end) that go through the family printer every month. Playing around with units, measurement, and number conceptualization doesn’t take the mathematical legitimacy out of statistics – it allows children the opportunity to challenge themselves, and to explore data on their own terms.