Posted on October 20, 2014 By Hilltown Families 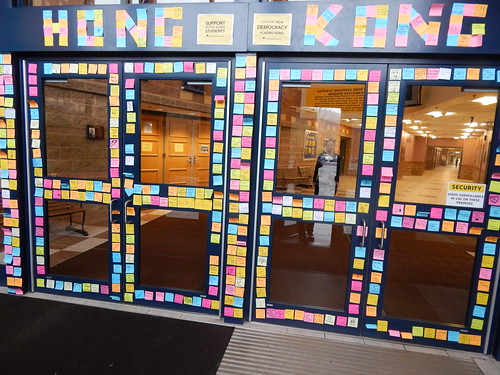 The entrance to Gateway Regional High School in the Hilltowns features student words of support for Hong Kong protesters.

Hong Kong. A city of more than seven million people, is a global financial center known for its film industry and manufacturing sector. And more recently, known for the protests that have brought tens of thousands to its streets, all demonstrating for free and fair democratic elections. Recently, students at Gateway Regional High School in Huntington, MA, put together a campaign to raise awareness of the events in Hong Kong and to show support for the pro-democracy protesters half a world away. Senior, Cory Bisbee,  had followed the protests closely and decided to start organizing a group of fellow classmates to address them after police shockingly used tear gas and pepper spray on the protesters.

“My first thought on the protests was, ‘It’s amazing the way that youth, from high schoolers to college students, are getting involved in Hong Kong, where the protests are largely student run,” Bisbee said. “Naturally, my second was, ‘How can I help?’”

After some individual planning and brainstorming, Bisbee consulted with fellow students, Casey Pease, Davis Britland and Jenna Margarites. Bisbee recalled that people initially did not have a deep understanding of the protests, but said that all were immensely enthusiastic about showing solidarity with the protesters and maybe reproducing some of their energy in students at Gateway.

“When Cory told me about his idea I thought, ‘Wow, this is really cool!’ and immediately jumped in on the project. Once I really started to understand what the students in Hong Kong were doing, I wanted to help show support in any way possible,” said Pease.

Bisbee arranged to meet with the others in the school library during lunch the next school day. He brought a pack of sticky notes and invited students to help make a wall of messages of support. With approval from the high school principal, the students decided on a goal of covering the front entrance of the school building with the notes. Bisbee noted that the group was able to mobilize quickly because they were all class officers and members of the Model United Nations club.

Two days later, the group had a table set up in the cafeteria and invited other students to write messages. Staff also contributed their thoughts and support and the front doors began filling up with words of encouragement.

The protesters in Hong Kong want the right to choose the leader of their city. Before the former British colony was returned to China in 1997, the UK and China signed a joint agreement saying that Hong Kong would have a “high degree of autonomy” within China, along with a right to the democratic election of its own leader.

“Hong Kong’s autonomy and freedoms have been persistently eroded by China and it has yet to have democratic elections,” said Bisbee. “In late August, the Chinese government announced that they would be implementing universal suffrage for the city. Everyone would get to vote for the city’s leader, known as the Chief Executive, but China would essentially be able to dictate who the candidates were, screening out any that it felt weren’t supportive enough of the Communist Party. This set off the student strikes and protests that have become known as the Umbrella Movement.”

← Nature Table for October
Grandpa in the House: Stuck in Intergenerational Traffic →