PARENTS’ NIGHT OUT: Win Tickets to see Mary Chapin Carpenter at the Calvin

Posted on October 7, 2014 By Hilltown Families 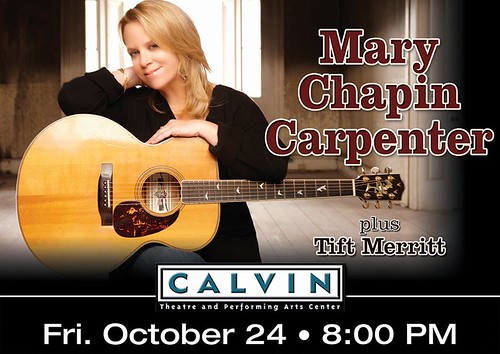 Continuing our fall promotions, we are pleased to offer a chance to win one of two pairs of tickets to see Mary Chapin Carpenter, plus Tift Merritt, at the Calvin Theatre in Northampton, MA at 8pm on Friday, October 24th, 2014.

Five-time Grammy Award-winning singer-songwriter and 2012 Nashville Songwriters Hall of Fame inductee Mary Chapin Carpenter, a Pioneer Valley favorite, returns to the Calvin Theatre in Northampton, MA, for a unique and intimate acoustic show. She will be joined e by longtime friends Jon Carroll (piano) and John Doyle (guitars, bouzouki). Carpenter spent 2013 performing alongside world-renowned orchestras since the release of her debut orchestral album, Songs From the Movie (Zoë /Rounder). In March, she performed two milestone concerts at New York’s Lincoln Center with the New York Philharmonic, conducted by six-time Grammy Award winner Vince Mendoza who also arranged the album. She was joined by Joan Baez, Shawn Colvin, Jerry Douglas, Aoife O’Donovan, & Tift Merritt (Tift joins her on this tour). Over the course of her career, Carpenter has sold over 13 million records. With hits like “Passionate Kisses” and “He Thinks He’ll Keep Her,” she has won five Grammy Awards (with 15 nominations), two CMA awards and two Academy of Country Music awards for her vocals. Her songs speak to the most personal and universal of life’s details. — www.marychapincarpenter.com

We’re giving away two pairs of tickets. Your chance to win a pair of tickets to see  Mary Chapin Carpenter, plus Tift Merritt, at the Calvin Theatre in Northampton, MA at 8pm on Friday, October 24th is easy & simple! To enter to win simply fill out the following and we’ll  randomly draw two winners from all who enter (one entry per household).

One Comment on “PARENTS’ NIGHT OUT: Win Tickets to see Mary Chapin Carpenter at the Calvin”