Off the Mat: Lessons in Unconditional Love from Piggett

Posted on October 6, 2014 By Hilltown Families 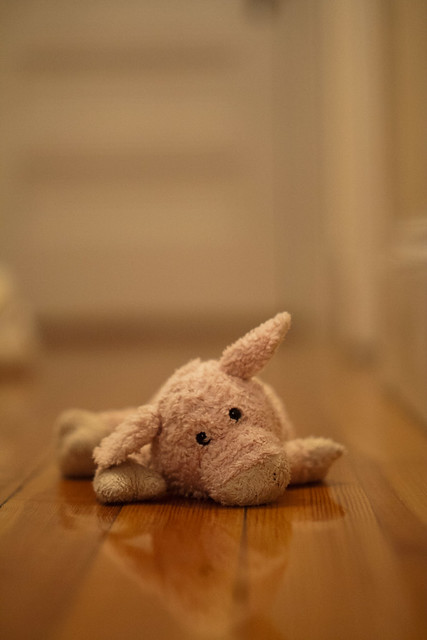 My boy is at school. Kindergarten. A whole new world. He’s only a mile away, much closer than the preschool over-the-river-and-through-the-woods. Still, it feels farther. Distant. I was in and out of his preschool room. Most days we said goodbye at his cubby-hole, but there were regular opportunities to come in and play, read a book, or just cuddle until he was settled.

Now, we say goodbye as he sprints out to the bus. If he remembers to say goodbye. He goes into a big building and hangs his new big backpack in a cubby I have never seen. May never see.

I remember him that very first day, all wrinkled and noisy.

Barely bigger than I am and almost as pink. I doubt he noticed me among the clothes and cards on the window sill. But I was there. Barb had looked for weeks before she finally found me at a mall kiosk. “I think this is the right stuffed pig for Ginny’s baby.” And indeed I was.

It was that first stomach bug that tagged me as the Chosen One. I was tucked up under his chin when all hell broke loose. I took a direct hit. The others in the crib remained bright and new. Untouched.

For a while, Ginny kept me in the crib. With two naps a day, I had plenty of time with him. But then he slept less and needed me more, so she let me venture out into his world. Stroller rides and car trips. Walks dangling from his tiny hand, my tail – or ear – dragging the ground. The way he would chew my nose made me grunt with joy. It was more than a year before he had the human words to tell them, “Dat Pigget sound.”

I had a name! My name became synonymous with comfort. Mama, Poppa, Pigget. I was right up there, top billing. I would stay with him when Ginny wasn’t – in the playroom at the gym, for instance. I was so proud the day he toddled over to a crying infant and put me in her bouncy chair. She wasn’t interested, thankfully, but his empathy was noted. And who could forget the times I was prominent in my absence, like in Grammy and Poppy’s church nursery. Let’s just say it didn’t go well. When Ginny fetched him, eyes puffy and red, all he could choke out was “P-p-p-pigget.”

Now naps are long gone. He plays with me still, though sometimes it feels like he’s just resisting sleep. When Ginny comes in each morning, I’m just as often stuck beside the mattress as under his arm. He says he needs me at night, but I wonder how long before he drifts off without me, not noticing the difference. 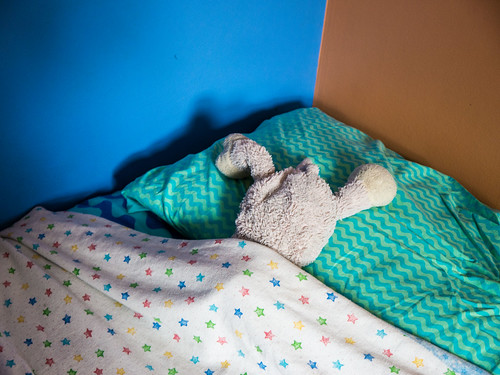 He’s at school twice as many hours. When he gets home he wants to draw or play trains and is filled with stories of gym class and mathematics and children I don’t know. He has plans after school with a new kid. I don’t even know if this boy’s got a special stuffie. What if he’s a blankie kid?!

I don’t think he even considered bringing me to kindergarten. If he did, he didn’t mention it. Truth be told, I don’t think he needs me there. And I’m glad for that. Really. I want him to be confident. Comfortable in his own skin. He’s designed to grow and learn and explore. To venture out.

I want him to fly as freely as when he flings me high, limbs and tail flapping, somersaulting through the air. I wish for him soft landings, too. I’ll be here when he comes home. When he needs softness after a nightmare real or imagined. To be reminded of the security of childhood. Love is real. And I’m real now, just like the wise Skin Horse said to the shabby rabbit in that old story. Real is love.

← An Ever Expanding Portrait of the American Hero Serves to Inspire & Educate
Spark!Lab Lights the Fire of Invention →