Posted on September 23, 2014 By Hilltown Families 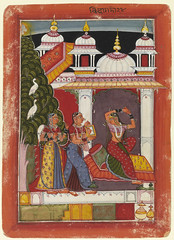 Ragamala represents a dynamic intermingling of music, poetry, and painting in India. Ragamala is Sanskrit for a “garland of ragas,” which are unique musical compositions. Drawn from the museum’s rich Indian collection, this exhibition features sixteen ragamala paintings from the 17th and 18th centuries.

You’ve probably heard the saying, “A picture is worth a thousand words,” but what about a picture that illustrates those words… or even a song? How might you translate the mood evoked by an instrumental song into a picture, painting, or even a poem?

Between the 16th and 19th centuries in India, a classical Indian musical tradition called a raga, took on a new characteristic that did just that.  A raga, which translates roughly from Sanskrit into beauty, melody, and color, is similar to a musical scale: a selection of musical notes arranged specifically to convey, or color, a mood; discrete ragas are used to represent specific times of day and/or seasons.  These complex, richly textured melodies inspired poets to create poems based on the moods they evoked.  Artists then transposed these poems and melodies into paintings that visually convey the moods, events, and seasons represented by each raga and poem, and often include a few lines from the associated poem.

The Williams College Museum of Art will have a ragamala–a set of these miniature paintings–on display between September 27, 2014 through January 4, 2015.  Sixteen miniatures from the museum’s notable Indian art collection will be on view. 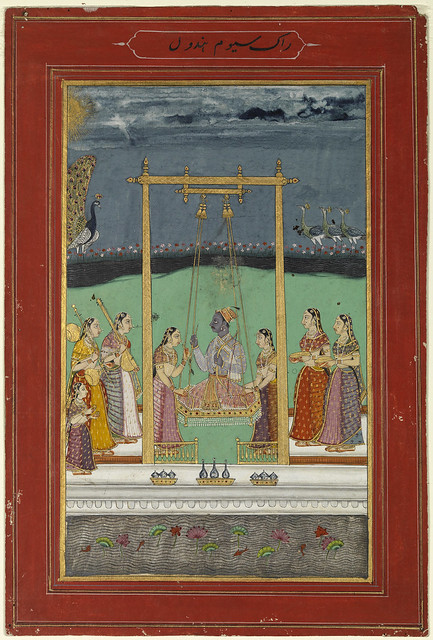 Interested in learning more about Indian music?  On Thursday, October 9th, 2014 at 4pm, Williams College Professor Anthony Sheppard of the Music Department will offer an overview of Indian music before discussing the significance of the visual representations of ragas on view.  Following his talk, musicians Veena and Devesh Chandra will demonstrate several classical Indian instruments and perform a raga live!

Admission is free.  From September to May, the museum is open every day between 10am and 5pm; closed Wednesdays. Williams College Museum of Art.  413-597-2429.  15 Lawrence Hill Drive, Suite 2.  Williamstown.  For more information: www.wcma.williams.edu