PARENTS’ NIGHT OUT: Win Tickets to see Esperanza Spalding at the Calvin

Posted on September 16, 2014 By Hilltown Families 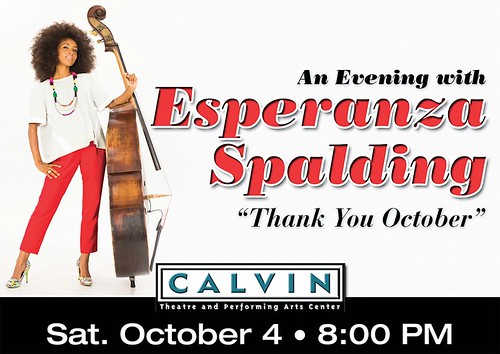 Continuing our fall promotions, we are pleased to offer a chance to win one of two pairs of tickets to see Esperanza Spalding at the Calvin Theater in Northampton, MA at 8pm on Saturday, October 4th, 2014.

Esperanza Spalding was one of the biggest breakout stars of 2011, garnering Best New Artist at the 53rd Grammy® Awards. Her journey as a solo artist began with the 2006 release of Junjo followed in 2008 by Esperanza which topped Billboard’s Contemporary Jazz Chart, becoming that year’s best selling jazz album worldwide. She was invited by President Barack Obama to appear at both the White House and the Nobel Peace Prize Ceremony. She performed at the 84th Academy Awards and on the Late Show with David Letterman. (Letterman and Paul Shaffer proclaimed the young musician the “coolest” guest in the program’s three-decade history.) Spalding collaborations include with Wayne Shorter, Prince, Herbie Hancock, Corinne Bailey Mae, Bruno Mars, and Janelle Monáe. Her latest album, Radio Music Society (see video) featuring a mosaic array of guest artists, is another expectation-defying chapter in the Esperanza Spalding story, as she continues on her journey of new musical horizons. — www.esperanzaspalding.com

We’re giving away two pairs of tickets. Your chance to win a pair of tickets to see  Esperanza Spalding at the Calvin Theater in Northampton, MA at 8pm on Saturday, October 4th is easy & simple! To enter to win simply fill out the following and we’ll  randomly draw two winners from all who enter (one entry per household).

One Comment on “PARENTS’ NIGHT OUT: Win Tickets to see Esperanza Spalding at the Calvin”