Grandpa in the House: Parenting in a Multigenerational Home

Posted on September 16, 2014 By Hilltown Families

Windows to the Past…and When to Close Them 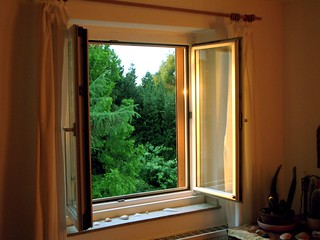 “But the windows…the windows strike a nerve that reaches back decades.”

This past August’s cool autumnal nights resurrected a family dilemma that I had hoped would be delayed at least a month longer – the problem of the open window. I assume I am like many New Englanders in that I like my windows open, at least a crack, until the first frost. Winter is already so long and the idea of saying goodbye to fresh air in August makes me want to weep.  Though honestly, weep is an understatement – it makes me downright furious.

My father, due to his advanced age and to his sensitivity issues, cannot stand being cold.  If a cool night is predicted I will be reminded countless times in my day that the windows need to be shut that evening. I will be given the precise temperature drop to be expected the moment I walk into the kitchen in the morning.  I will be reminded that he cannot shut our windows himself due to his weakening arms. I will passive aggressively ignore these comments in hopes they will stop.  They will not.

My father has lived with us for just over a year. Bringing in your aging parent is a lovely and loving act and one that I feel good about making. However, sharing your home with aging parents can also ignite two types of conflict – new resentment at needing to alter your lifestyle within your own home to accommodate someone else, and old resentment at needing to rehash the annoyances of your childhood again. For me, the open window falls under both categories.

I so miss the days when I could run my own home the way I liked. Little things that I once took for granted now sound so lovely – usage of that middle aisle in the refrigerator, leaving dishes in the sink until I decided it was time to wash them, letting my young son build Lego on the floor and not pick them up until the next day.  While I miss these things, I also accept their loss as a reasonable sacrifice one should make for an elderly loved one.  It reminds me and my son to think of others. But the windows…the windows strike a nerve that reaches back decades.

My father probably has high functioning autism, or Aspergers.  He has not been diagnosed but thanks to the past twenty years of increasing media and educational awareness, I at least have a name for my father’s quirks.  He is easy to fit into the stereotype – male, a literal math genius, and he was a computer programmer.  He worked on computers when they were the size of rooms and required massive climate control units to keep from overheating. The challenges of living with him are balanced by his kindness, amazing intellect, and a passion for learning that he surely passed down to me and I see already trickling down to my son. The challenges for me, my husband, and my son, come from my father’s perceived rigidness regarding select aspects of daily life.

Growing up as an only child with a father like my dad (and like my mom, who had mental health issues) required me to think like a caregiver at a rather young age.  I was needed to help my parents interpret the social world and any overly stimulating aspects of day to day life. I answered the phone, I ran errands, I cleaned the house. I worried lot about what my friends would think when they came over. One of my most embarrassing childhood memories is a comment made by one of the neighborhood kids, the not nice one, the one who was always certain to say something mean.  Today we would be quick to identify him as a bully.

“Your house smells!”  He was right. I knew that my house was stale.  We did air the house out, but only when the temperature allowed it.  We did clean, if by clean you mean me asking if I could because I was embarrassed by its state. We washed our clothes but not often because it required trips to the laundromat.  We could have afforded a washer and dryer but owning one was too much work, too much of an additional responsibility. So we only washed what really needed to be washed…blankets and jackets rarely made the cut. The house could indeed be funky. It was mostly neat and organized but not clean by most people’s standards. Select things were rigidly organized.  Dust bunnies covered nearly everything else.

Fast forward to today. I open every window of the house the moment I have an unpleasant olfactory response.  Cooking smells – open the windows! Toddler poop – window fans on full blast. I keep them open all the time to prevent any embarrassing odors before they start.  30 degrees outside?  Who cares, it smells like boiled eggs in here.

What I am beginning to realize, slowly and somewhat unwillingly, is that when it comes to my father I am increasingly the one being unreasonable and rigid. It has been cold.  My father is 82 and perhaps it is fair of him to expect that I close the windows before bed when the temps reach the 40s.  Maybe, just maybe, I am letting my bottled up resentments from childhood get the better of me and cause undue conflict in the household where I am currently raising my son – a son who I do not want to grow up with his own intense issue regarding windows.  It might be time for me to just close them…

Statistics on older adults with Aspergers are non –existent since diagnosis only began in the 1990s and few adults seek diagnosis later in life. But here are some web articles I’ve found helpful as I continue to educate myself on older Aspies:

Wendy is an educator and history geek who lives in a century old summer cottage in Goshen with her family, dog, and two cats.  She recently left her work in museum education to become a full time stay at home caregiver to her young son and elderly father. Her column touches on the juggle of the sandwich generation and issues surrounding elders on the Autism spectrum.  When not playing, cleaning, cooking, or chauffeuring, she reads local history, mommy blogs, and celebrity gossip – but she will never admit to that last one.

6 Comments on “Grandpa in the House: Parenting in a Multigenerational Home”