Posted on September 15, 2014 By Hilltown Families

This latest exhibition at the Mount Holyoke College Art Museum is expected to “draw” crowds: an exclusive selection of 45 drawings by Henri Matisse, the widely-known 20th century French artist known best for his colorful, expressive portrayal of the human form in paintings, sculptures, cut paper, and drawings.  The drawings on display span half a century and include both sketches and finished drawings. 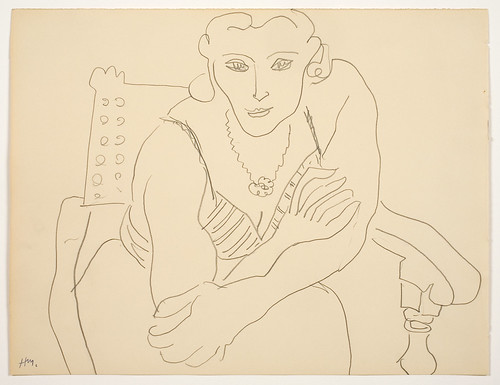 Students of art and art history will be particularly excited about this exhibition because it offers an opportunity to interact with original artworks by a historically significant artist right here in Western Massachusetts.  A chance to eliminate the need for excessive travel and planning, while still showing your kids the art of one of the great masters: it’s a foolproof combination!

The drawings on display were hand-selected for this exhibition from the Pierre and Tana Matisse Foundation Collection by Ellsworth Kelly.  Kelly, who, like Matisse, is an internationally recognized artist known for his drawings, paintings, and sculptures, curated and designed the Matisse installation at the Museum.  While he admits to having been greatly inspired by Matisse’s use of lines and space, Kelly’s style is all his own.  Arranged to coincide with the Matisse exhibition at MHC is a display of Kelly’s botanical prints from the 1960s, on display elsewhere in the museum.  Mount Holyoke College Art Museum Director John Stomberg says of Matisse, “His particular gift was an economy of line.  A majority of what he communicates with his drawings he achieves through implication rather than replication.”  This descriptor could easily be used for Kelly’s lithographs as well.  Both artists, by drawing simple figures and shapes, leave much for the viewer’s imagination to fill in–while conveying enough to elicit the viewer’s interest in constructing a narrative for the image.

Of course, Matisse is best known as a main protagonist in the Fauvist movement, in which bright colors and patterns were generously used, regardless of the subject’s actual appearance–causing these revolutionary artists to be likened to “wild beasts” with no respect for traditional distribution of pigment on canvas.  These drawings, though they contain the same type of deliberate yet non-realistic lines and energy as his paintings, are not nearly as colorful!

← Learn the Ways of Pollinators and then Support Them!
Grandpa in the House: Parenting in a Multigenerational Home →