PARENTS’ NIGHT OUT: Win Tickets to see Tweedy at the Calvin

Posted on September 9, 2014 By Hilltown Families 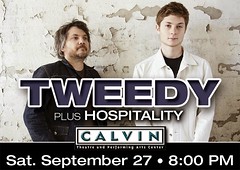 Starting off our fall promotions we are pleased to offer a chance to win one of two pairs of tickets to see Tweedy plus Hospitality at the Calvin Theater in Northampton, MA at 8pm on Saturday, September 27th, 2014.

As the founding member and leader of Wilco and before that the co-founder of Uncle Tupelo, Jeff Tweedy is one of contemporary American music’s most accomplished songwriters, musicians and performers. Since starting Wilco in 1994 Tweedy has written original songs for eight Wilco albums and collaborated with folk singer Billy Bragg to bring musical life to three albums-full of Woody Guthrie-penned lyrics in the Mermaid Avenue series. His latest project is Tweedy, a musical collaboration with his 18 year old son and drummer Spencer Tweedy. The father/son duo’s debut album is called Sukierae and features 20 songs written by Jeff Tweedy. With Spencer on drums, Jeff handles his usual guitars and vocals, as well as bass and keyboards. Musician Scott McCaughey (R.E.M., The Minus Five, The Baseball Project) lends additional keyboards and backing vocals on Sukierae come courtesy of Jess Wolfe and Holly Laessig of the Brooklyn-­-band Lucius. — wilcoworld.net

We’re giving away two pairs of tickets. Your chance to win a pair of tickets to see Tweedy plus Hospitality at the Calvin Theater in Northampton, MA at 8pm on Saturday, September 27th is easy & simple! To enter to win simply fill out the following and we’ll  randomly draw two winners from all who enter (one entry per household).

One Comment on “PARENTS’ NIGHT OUT: Win Tickets to see Tweedy at the Calvin”