When you think about pigeons, what immediately comes to mind? Chances are, you’re remembering an encounter with a rock pigeon–a gray bird with black stripes on its wings, often spotted pecking at the sidewalks or perched on architectural features in urban areas. These birds are so eponymous with the word “pigeon,” and so closely associated with cities like Boston and New York, that it may surprise you to learn that this particular breed of pigeon is actually native to Europe – and that, long before the rock pigeon arrived in North America, a native breed called the passenger pigeon dominated the skies. Prior to the 20th century, this one breed was so populous – estimated at between three and five million – that they represented more than one-quarter of all the birds in North America. They lived and traveled in enormous flocks: their numbers were so great that a migrating flock could darken the sky, concealing the sun, for several hours at a time. By the end of 1914, however, the breed had become entirely extinct. 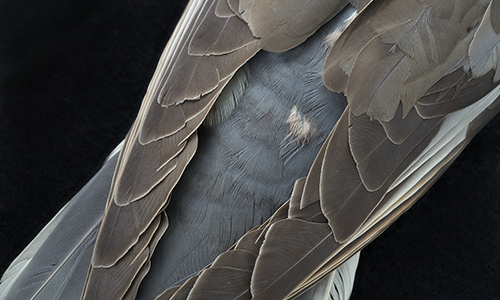 “I was so moved by this exhibit, and my daughter was fascinated!” – Sarah Rankin (Hilltown Families reader)

Eclipse, a new multimedia exhibition at MASS MoCA, explores the phenomenon of species extinction through the history of the passenger pigeon, a century after the death of the last known bird. On view through spring 2015, the exhibition is comprised of an immersive video and audio installation in the four-story “lightwell” at the center of the MASS MoCA complex. It was developed in response to a series of conversations between Elizabeth Kolbert, author of Field Notes from a Catastrophe: Man, Nature, and Climate Change and a writer for the New Yorker, and artists Susannah Sayler and Edward Morris (collectively and professionally referred to as Sayler/Morris). It passes the knowledge of the passenger pigeon’s existence and extinction, an “event that lies at the edge of cultural memory and obscurity,” on to younger generations, and serves as a reminder that human action (and inaction) can contribute to unforeseen, often irreversible, natural and environmental changes.

The exhibition’s title, Eclipse, contains a dual message. On the surface, the name refers to the darkening of the sky overhead that John James Audubon and many others observed in the passenger pigeon’s heyday. The name also suggests occupation, or replacement: in this case, the advent of the European settlers who freely hunted passenger pigeons and contributed to the rapid decline of their population, as well as the subsequent introduction of European rock pigeons, who today are so numerous that they are often simply called “pigeons” – no clarifying species name required. Within the exhibition, visitors can experience a jaw-dropping simulation of the passenger pigeon eclipse witnessed by early American settlers.

MASS MoCA offers a thought-provoking synopsis of the exhibition:

With Eclipse, Sayler/Morris illuminate several aspects of the birds and the story of their extinction: the once overwhelming, even frightening numbers of passenger pigeons; the delicate beauty of the individual birds contrasted with their odious nature in large numbers; and the sadness of their complete and irreversible disappearance.