The Ripple: Setting our Watches to the Geological View of Time

There’s Gold in Our Hills! 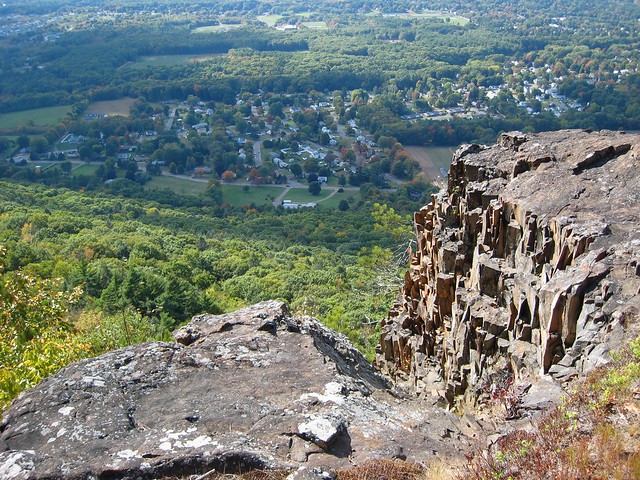 Gold in Mt. Tom anyone?

I met a person who was panning for gold in one of our hilltown brooks this summer who knew a lot about geology—at least enough to know that gold is produced by volcanic activity. We don’t think of our biome as having volcanic bones; Iceland, Hawaii, and the Pacific Rim come to mind, but Huntington?

Look closely, though, and you’ll find evidence of igneous geology all over the place: from Mounts Holyoke and Tom which were bubbling lava when hungry raptorsauri ran wild here 200,000,000 years ago, to the weirdly eroded lava ash boulders people place out by their driveways in Goshen, to the cocoa puff pumice balls that float in eddies just downriver from the Turners Falls dams.

Darwin said that he could not have derived the theory of evolution without first having gained a geological view of time, and I think that a major reason why we are unable to come to grips with climate change is that we lack that 200,000,000 year view.  Our concept of time is defined by our economy, which operates according to quarterly earnings reports and the 9-5 work week. When it comes to environmental issues, our short-sightedness is hard-wired by our constant participation in all sorts of frustrating and unsatisfying ritual behavior like rush hours and application deadlines.

Strange as it is, our survival as a species is threatened by how we imagine time, and how we place our lives in these imaginary constructs: such as April 15, July 4 and January 1. If there was no negative impact derived from these temporal fantasies, I wouldn’t be writing this; but our view of time lets us imagine that we are, more or less, individually-packaged portions of being who can individually-package and consume (and make garbage of) everything around us—when in fact, Darwin’s geological/evolutionary view proves exactly the opposite. Our species is not separate from any bit of the earth and its collective evolutionary history; our belly is filled with lactobacillus, for example, that lived outside for at least a billion years before it wrapped our flesh around it and made us its home. Because we are not separate, what we do to what surrounds us, we do to ourselves.

Walking in rivers is one of the best ways to nurture a geological view of time and, then, to imagine our own lives as symbiotic participants in the larger, longer life that is our planet. A great introduction to our local geology is Dinosaurs, Dunes, and Drifting Continents : The Geohistory of the Connecticut Valley by Richard D. Little. I highly recommend it, for it has opened my eyes to, and increased my appreciation for, the stories the rocks in the rivers can tell to those who can read them. For every rock, from the dino print slate next to the CT River in Holyoke to the “book shelf” anticlines of the Westfield River gorges, is engrafted with truth: the truth that our planet has been the home for species that appeared, thrived and vanished. This truth should lead us to both humbleness and delight: humbleness because we are recipients and not creators of the gift of life, and delight because we are always the product and perceivers of that same miracle. The awareness of extinctions should alarm us, because we are as apt to go the way of the dinos as any other temporarily successful species; and that alarm should be health-bringing in that it awakens our duty to—like lactobacillus—not destroy our host. At the same time, the presence of frogs and ferns should empower us, for their ancestors were alive when Mounts Holyoke and Tom were active volcanoes; and here they are, living in our valley and hilltowns today.

When I met the gold-panner in the brook this summer, I groaned because images of California’s spoiled Sierran rivers flashed in my mind. But after we exchanged some enthusiasms about the geomorphology of Western Mass, and he told me he was only using a pan and not a rig with hoses, to look for gold, I relaxed. I too have found gold in these, our hills, I said: the treasure of being placed—in the body of our planet and in the continuum of evolutionary history.