As one of They Might Be Giants’ best-loved (and paleontologist-narrated) children’s songs proclaims, “I love diggin’ in the dirt!” The potential for getting dirty is just what many kids need in order to become interested in dinosaurs, but it’s not the only hook. In addition to the fun that comes from digging and discovering, dinosaurs are fascinating to children for the magic and mystery that surrounds them – though we have lots of evidence that supports their long-ago existence, young ones whose understanding of time has not fully developed are astounded by the beasts of long ago. Drastically different from most of the creatures seen on Earth today (at first glance), dinosaurs’ shape, size, and even habitat are fascinating and almost unbelievable to youngsters. 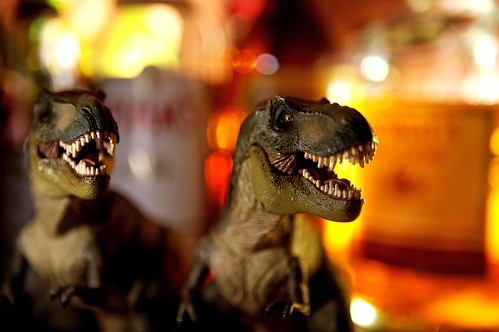 Engaging children in dinosaur-related learning allows them not only to learn about the prehistoric beasts, but presents opportunities for lots of other types of learning as well. Learning to identify dinosaur species can help young children practice putting words to specific characteristics related to a species’ shape, size, and coloring, while for older learners, species identification serves as a means of understanding the role of each specific body part that distinguishes one type from the next – information that can help children to understand animal adaptations and evolution. Additionally, dinosaur studies supports children in learning about the climate- and landscape-related changes that the Earth undergoes over time.

Of course, as is true with any topic, there is a limit to the amount that children can learn from books and media and, at a certain point, some real-life experience become necessary. While there aren’t any dinosaurs around for us to meet (luckily), there are a great many local resources that families can utilize to support children in learning more about dinosaurs, their former habitat, and the ways in which we learn about the extinct creatures today.

Visit the Springfield Museums‘ Dinosaur Hall – a permanent exhibit – with replicas of dinosaur skeletons, including some from creatures once found in the Connecticut River Valley.

Another museum resource available to families year-round is Amherst College’s Beneski Museum of Natural History offers dinosaur-enthusiasts a look at what Amherst might have looked like when dinosaurs – rather than college students – roamed. In addition to dinosaur-related exhibits, the Beneski Museum’s collections include thousands of vertebrate and invertebrate specimens recovered using the same paleontological techniques used to unearth dinosaur fossils.

To see some real-life evidence of the prehistoric beasts who once called western Massachusetts home, visit a local dinosaur footprint site. In Holyoke, the Trustees of Reservations maintain an exciting site filled with over 150 footprints in sandstone – the result of a herd of two-legged carnivorous dinosaurs running through the sub-tropical swamp that existed where the Connecticut River runs (this was about 190 million years ago, of course). The Trustees’ footprints are accessible via a short trail, and are open to visitors through the end of November.

For a paleontological treasure hunt that yields fossils for keeps, visit the Rock, Fossil, and Dinosaur Shop in South Deerfield. Home to life-size replicas of a variety of dinosaur species, the main attraction of the Rock, Fossil, and Dinosaur Shop are the Bonanza Boxes – large boxes fill with sand littered with gemstones, minerals, and fossils just waiting to be uncovered and taken home as treasure! (Closed during the winter months.)

Further learning about dinosaurs can take place thanks to a Trustees of Reservations program, available for groups visiting the dinosaur footprints in Holyoke. The Dinosaur Detective offers not only information about the tracks themselves, but teaches about the human history that surrounds them – such as the initial discovery of the tracks and the research that has taken place since then.

Of course, no exploration of dinosaurs is complete without learning about Dexter Marsh, 19th-century Greenfield resident and creator of one of the country’s first dinosaur museums. Drawing over 3,000 visitors in just seven years, Marsh’s collection is housed predominantly at Amherst College and the Boston Museum of Science today.

Finally, don’t miss out on belting out lyrics about paleontology with the Hilltown Family Variety Show – the Science and Education episode offers musical takes on not just dinosaurs, but all things science- and learning-related!