Posted on August 6, 2014 By Hilltown Families 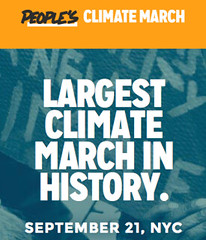 There is something important happening in September. It’s the People’s Climate March in NYC. They claim it will be the biggest climate rally in history. They also say it will be pet and family friendly, so I’m using encouraging Pioneer Valley locals to get to the march on September 21st, 2014. A local team of people are working on organizing charter bus transportation and carpooling to the march in NYC in September. You can travel round trip for $25 or less getting back the same day, so don’t let cost or time stand in the way. The atmosphere and tenor of the event is meant to be dignified, fun, impacting and empowering. This is not the place for terror and fright as it will certainly be permitted by NYC, peaceful and safe for all who come. Keep an ear out for fun, local, and creative activities leading up to the support of the rally.

World leaders are coming to NYC for a UN summit on the climate crisis. The UN Secretary is urging governments across the globe to dramatically reduce global warming pollution. We have many to thank for climate solutions that have been churning since scientists and environmentalists began researching and planning for a climate solution. You might be familiar with 350.org and its founder Bill McKibben. The ‘350’ refers to the safe level of carbon in the atmosphere, of which we have surpassed and are now at 400 parts per million and growing. My family was at the climate rally along with 35,000 others, that was put on in DC on President’s day in Feb of 2013. It was put on by 350.org in protest to the Keystone pipeline, which would have piped oil through the ‘breadbasket of America’ from Canada to Nebraska, to then be shipped overseas through the Gulf of Mexico.

Seems like a lot of work with a finite limit to the amount of oil that is extractable. Plus it would produce tar sands crude which puts out two or three times as much carbon pollution as producing conventional crude oil. Presently the project remains incomplete but an argument for job creation is building a foundation for its completion.  We could easily shift the labor and construction into solar arrays which provide energy security while at the same time securing our future through sustainable renewable ways. You can’t say we don’t have the technology or the know-how when there is a whole host of local photovoltaic installers in our area and around the country. With recent super storms, severe drought, floods and increased illness from more severe heat waves and pollution the recognition of climate change and its effects are clear. The idea to get our planet back to a 350 or less ppm in carbon would mean drastically reducing our dependence on fossil fuels.

More than ever, shopping locally and supporting local farms and businesses can help us strengthen our local economy by putting local dollars back into the community. Through buying local, we reduce demand on products that have to travel greater carbon-producing distances. Tomatoes from your Town Farm or tomatoes from Mexico at your local grocer?

Whether you can make it to the march in September or not, how easy would it be to make a commitment to finding your way to all the local farmers’ markets this season to not only nourish your tastebuds with the freshest of the season but to benefit the atmosphere and your local economy as well (plus, there’s a ton of learning opportunities at farmers’ markets!)? Now with all this talk of non-labeling for GMO continuing we as consumers have huge voting power at the check-out aisle. Did you know that some of your ‘natural’ brands parent companies have donated millions to defeat Prop 37(CA), and that members of GMA plan to sue VT for their GMO labeling law? You might want to take a look at this chart on the organic industry structure. The world is going to be better off with your voice in it, so make sure yours is heard either at a rally or at the market. There are so many ways we have the opportunity to make an impact and none are invalid, only the ones that never get put into action.

Angie Gregory settled in the Western MA 6 years ago after many years of traveling the country. She lives in Northampton, MA with her husband and three kids and is an avid gardener and studies herbal medicine. She has worked in the community fostering projects like Grow Food Northampton and started Mother Herb Diaper Service out of her home after the birth of her second child. Her business is now a cooperative venture  and has relocated to Holyoke, MA under the name of Simple Diaper & Linen.

← Hampshire and Hampden Canal: Gone but not Forgotten
Explore & Connect to Where You Live through Nature Bingo & BioBlitz →