The Ripple: Squelching through Wetlands Reveals Nature at its Most Natural

The Beauty and Ickyness of Upland Wetlands 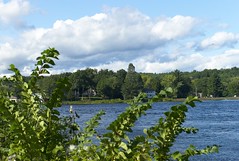 Thanks to wetlands, mountain rivers should be clear while valley rivers like the Connecticut can resemble a river of milk chocolate.

Last week, I stood by the side of the East Branch of the Westfield River in Chesterfield with a group of intrepid explorers, astonished by the gasp and growl of its raging flood waters. “Where’s Augustus Gloop?” I heard someone ask; “He would love all this hot chocolate!”

Laden with brown soils that had eroded from roadsides, construction sites and fields upstream, the river did look like it was made by Willy Wonka. A wild and scenic river like the East Branch of the Westfield should not look like hot chocolate because of its federally-registered conservation status, and the fact that there is little development in the hilltowns. And yet here was unmistakable proof that torrential rain on vegetation-less lands was causing extensive erosion.

Erosion is not good for the ecosystems it removes earth from, nor is it good for the river ecosystem or downstream dams which get silted up. Generally speaking, mountain rivers should be clear while valley rivers like the Connecticut, Nile or Mississippi can, and should annually, be cloudy as they transport nutrient-laden silts onto agricultural fields.

Knowing that we could not get much deeper than up to our ankles in the Westfield that day, we wandered downriver to its confluence with the Dead Branch Brook. It didn’t look like hot chocolate, and though a few inches higher than usual, it was not flooded. The water was cold, too, in comparison to the lukewarm Westfield River—something these explorers experienced directly as they placed one leg in one watercouse and an another in the other. “Why?” they wanted to know. I reminded them that they already knew. A few days earlier we had investigated the beautiful and icky world of upland wetlands in one of our more obscure public recreation lands, the Dead Branch State Forest. When we arrived at the wetlands there, nobody wanted to venture into them. Our species seems to have a deep, instinctual aversion to swamps—at least compared to canines, who charge instantly into them, dazzled and lured by the crazy olfactory mix of fresh sweet blossoms and decaying dead things.

Wetlands are first and foremost places of abundant food for all sorts of beings: bugs, birds, amphibians, reptiles, mammals. We could barely take a step without finding another wood frog, eft or salamander—a very good sign, as these creatures are “bioindicators”: their presence signifies a healthy ecosystem. Raccoon, deer and moose prints were also evident, giving us a thrilling feeling of wilderness. In the meantime, we became food for the mosquitoes and deer flies; and perhaps our instinctual aversion to wetlands stems from this, our primal resistance to being a source of food for other creatures.

Soon enough, the braver amongst us stepped off terra firma and made their way into the mud and slowly coursing swamp water. Screams of delighted fear rang out through the hemlock forest as we sunk deep into the primordial ooze, releasing swarms of shin-tickling methane bubbles. The thought that there might be biting worms or worse lurking in the cloudy sediments seems also to be a contributor to our aversion to wetlands; but there are no such things (though do keep on the look out for leeches); and after a few minutes of unbridled tension, our hunting and gathering band began to relax. We’d strutted through the grossest stuff, and nothing bad had happened. A little bug spray kept the biters away, and—really—once we calmed down and stopped projecting our fears upon it, the wetlands assumed its true authentic character as a place of exquisite visual beauty, dragonfly on grasstip repose and extravagant biotic jewelry. Someone noted, and gained unanimous approval for bringing our attention to, the fact that it smelled good, this strange combination of sweet blossoms and decaying forest. It didn’t smell rotten; it smelled clean.

Wetlands serve as a sort of gastrointestinal tract of any biome; yes, I return here to the side of wetlands that somehow deeply disgusts us. But, as we owe our lives to this part of our physiology, even if we don’t want to think about it, so does our living land require it, too.

What I found so wonderful about our wetland walk was how we learned from directed experience that wetlands, for all their ickyness, are not really icky at all. They just require more of us than other land forms; we must slow down drastically when we are in them, or else they will claw and scratch us, or let us sink until we reach solid bottom. There is a way of walking wetlands that must be practiced that involves learning to see what can support weight and what can’t—and for espying and following the routes of other creatures, like deer, who do not like to get wet. The reward for such an education is a high dry stranded boulder seat in the wildest, least frequented, most vivacious part of our world.

Why was the Westfield flooding with warmish hot chocolate, while the Dead Branch rushed cool and nearly clear? We knew—upland wetlands act as sponges, swelling up when inundated just like the sponge in your kitchen sink; and just as the sponge slowly leaks water back into the sink when laid down, so does the wetland slowly release trickling waters that would otherwise be floods.