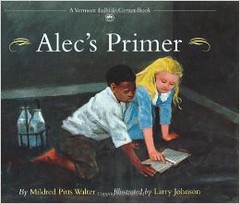 Alec’s Primer is a story of freedom – a true one. Based on the real-life experiences of a man named Alec Turner, the book follows a young boy born into slavery through childhood on a plantation, fighting for the north during the Civil War, and finding freedom in Vermont. Though born a slave and forbidden to learn literacy skills, young Alec learned to read with the help of the plantation owner’s granddaughter – who insisted that Alec learn the alphabet despite the trouble that he would be in if he were to be found out. In learning the foundation of reading and writing the English language, Alec gets his first taste of freedom and dreams of someday escaping to Vermont – though he does suffer punishment for learning to read.

When Alec is much older, he hears about the beginning of the Civil War, and learns that he can be granted freedom if he agrees to fight. Though he risks being killed in battle, Alec joins the military and fights not only for his own freedom, but for the freedom of all others in his situation. The story ends with Alec finally free and in Vermont, just having bought land for a farm.

Though the story begins in the faraway south, it ends quite close to western Massachusetts. Alec Turner’s farm was located in Grafton, Vermont – a community whose landscape, culture, and history is quite similar to communities here in our area (and it’s just a short drive north for some local folks). Alec’s story is, of course, specific to his own experiences, but there were many other freed slaves who, similarly, gained freedom by fighting in the war and found places within communities across western Massachusetts. Alec’s story addresses an important part of this area’s history, bringing up local communities’ role in the abolition movement .

While the most obvious topics to teach using Alec’s Primer are slavery and the Civil War, there are endless themes that can be addressed using the book. In addition to supporting place-based studies of the Civil War and the abolition movement, a reading of the book can spark discussion on topics such as what it means to be free, the ethics of restricting access to knowledge, courage, determination, and strength.

The accompanying literature guide is designed for use with fourth grade students, but the story is appropriate for nearly all elementary-aged readers, and activities outlined in the guide can be tailored to meet the interests and abilities of any child who reads the story. In addition to learning by participating in critical discussion of the themes within the story, children can expand their learning by utilizing (with help) the resources of local historical societies and museums to find out whether former members of their own community might have had experiences similar to Alec’s.

← Western Mass Historical Heritage for All to Explore
Under the Hat: Energize Your Child’s Imagination through Literacy →