The Berkshires are Alive with Live Theater Opportunities this Summer! 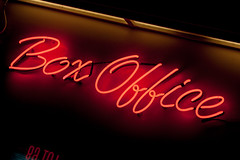 The Berkshires are alive! Get your tickets for a theater production and bring the family. There are options that fit all budgets!

The Berkshires region of western Massachusetts is filled with endless opportunities for learning and playing – especially in the summer. A popular vacation destination for locals and out-of-towners alike, the region offers up a wide variety of things to do, places to visit, and stuff to see. And this summer, some of the best stuff to see is on stage at the Berkshires’ many theaters and performance spaces! From children’s theater to clowning, Shakespeare to musicals, the Berkshires’ numerous theater companies are dishing out shows that not only entertain, but also present valuable learning opportunities.

Seeing a play or musical can be a monumental experience for children – the sheer scale of a theatrical production can be stunning, the energy and intensity of a show comparing only to that of films. For young theater-goers, shows provide a multi-sensory experience that utilizes a variety of artistic and technical tactics in order to convey a message and a story. Opportunities for fascination are endless at the theater – there are so many things to do and see! Children may pick up on the expression and infliction that actors use while delivering lines, or might consider how their costume speaks to their character’s lifestyle and personality. Others may notice how the set design and lighting patterns support the story being told, while still others may simply dissect the story being told, build connections to it, and pull from it a valuable lesson.

For a family theater experience, check out these ongoing and upcoming Berkshire performances: 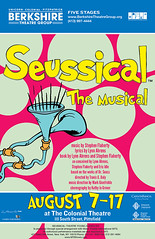 Hairspray, Jr. – Performed by a cast made up entirely of local teens, this musical is based on the film of the same name. Set in the 1960’s, the show follows Tracy Turnblad as she pursues her dream of dancing on television and navigates the racial tension of the times. Ages 5+. July 23rd – August 10th at the Berkshire Museum. 413-443-7171. 39 South Street. Pittsfield, MA. ($)

Seussical – Presented by the Berkshire Theater Group, this musical brings together many favorite Dr. Seuss stories and characters into one exciting show. Performed as the theater’s 9th annual children’s theater production, the show features favorites like the Cat in the Hat, Horton the elephant, and the Whos of Whoville. Runs August 7th – 17th at the Colonial Theater. 413-997-4444. 111 South Street. Pittsfield, MA. ($$) 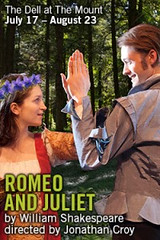 Romeo and Juliet – Shakespeare and Company brings this classic play to life in a beautiful setting in The Dell at The Mount, historic former home of Edith Whaton. July 17th – August 23rd. 413-637-3353. 2 Plunkett Street. Lenox, MA. ($$)

Robin Hood – Presented by the Williamstown Theater Festival at Poker Flats Field, this comedy will appeal to folks of all ages. Telling the classic story of Robin Hood and his Merry Men, the performance presents the perfect opportunity to enjoy dinner and a show – picnic-style! July 22nd – 25th. 413-597-3400. Williamstown, MA. (FREE)

Berkshire Fringe Festival – In its 10th year running, the Berkshire Fringe Festival brings all sorts of theatrical fascinations to the Berkshires. Designed to provide artists a venue for experimentation and testing new work, the festival includes a variety of artistic and comedic theater in numerous local venues. August 2nd – 18th. 413-320-4175. Pittsfield, MA. (>$-$$) 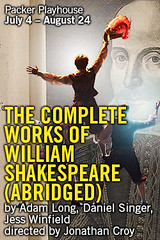 The Old Man and the Old Moon – Presented by PigPen Theater Co. at the Williamstown Theater Festival, The Old Man and the Old Moon combines music and theater for a show that is not truly a musical. Following an old man who has abandoned his job of lighting the moon in order to find his missing wife, the show pairs fantastic acting with technical and musical creativity for a unique experience. August 6th – 17th on the Nikos Stage. 413-597-3400. 1000 Main Street. Williamstown, MA. ($$)

Breaking the Code – This history-steeped show tells the story of Alan Turing, the brilliant mathematician and computer scientist responsible for breaking Hitler’s Enigma Code during World War II. Not only is it a fantastic performance, but the show teaches viewers about an important and interesting person in American history. July 17th – August 2nd on the Boyd-Quinson Mainstage. 413-236-8888. 30 Union Street. Pittsfield, MA. ($$)

The Complete Works of William Shakespeare (Abridged) – Pairing comedy with a healthy dose of the classics, Shakespeare and Company presents a show that combines bits and pieces of Shakespeare’s plays to make for a hilarious performance the likes of which Shakespeare could never have imagined. July 4th – August 24th at the Tina Packer Playhouse. 413-637-1199. 70 Kemble Street. Lenox, MA. ($$)