Literary Guide for Mordicai Gerstein’s “The Mountains of Tibet”

The Mountains of Tibet
by Mordicai Gerstein 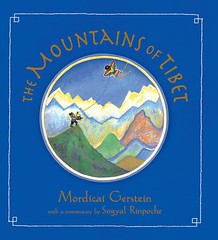 Literature Guide: The Mountains of Tibet

An accomplished writer, illustrator, and animator; local author Mordicai Gerstein‘s books for children are moving, beautifully illustrated, and feature deep themes that children of all ages (and the adults in their lives) can relate to. In The Mountains of Tibet, Gerstein weaves a lovely story about kite-flying and the passing of time with a lesson about reincarnation and Buddhist culture. Not only do readers learn to think about what happens after death, but the story inspires them to think about the many different belief systems that exist in cultures all around the world – helping to open their eyes to the vast diversity amongst humans.

The Mountains of Tibet focuses on a young boy who lives in a small village, high up in Tibet’s mountains. His favorite activity is kite-flying, and he spends his childhood imagining all of the places in the world that he might travel to when he is older and dreaming of all of the adventures that he may have in other parts of the globe. Despite his dreams of travel, the boy grows up to be a man who remains at home in his small village, serving as a woodcutter amongst the community in which he spent his childhood. Eventually, once he has accomplished much and becomes an old man, he dies and finds himself posed to make an important decision. Finding himself in a strange place that is somewhere between the earth and the rest of the universe, the man is given a choice: to remain as part of the endless universe, or to choose his own reincarnation without knowledge of his previous life. The man chooses reincarnation and, in a heart warming twist, he revisits his own hometown and experiences another life there as a kite-flying young girl.

While reading The Mountains of Tibet, families will have many opportunities to reflect and learn about life, death, reincarnation, and religious beliefs. Activities included in the literary guide for the book encourage the facilitation of discussion about the contrast between your own point of view and an author’s, differences between people and the reasons for their varying decisions, and death and the idea of reincarnation. Children able to think deeply about the possibility of reincarnation can consider the decision that they would make if they found themselves in the man’s position – would they choose to remember their life and become an endless part of the universe, or would they prefer to choose another type of life to experience? Additionally, older children can even speak to whether or not they believe in reincarnation, and why they think that way. Comparing their thoughts to beliefs held within religions and cultures around the world can help to open children’s eyes to the similarities and differences between them and others, and can help them to recognize the ideological common ground that they share with folks whose lives may – on the surface – appear to be worlds away from their own.

The story can also help families to cope with death, and can help children to find comfort in knowing that there are many ways of viewing death. While children may or may not decide that they agree with Gerstein’s point of view on reincarnation, simply considering the possibility can provide comfort to children who have lost a friend, family member, neighbor, or even a pet.

While the literary guide for the story is written for use with third grade students (eight- and nine-year-olds), the story is accessible to readers of all ages. Even young children can understand and learn from the themes presented in the story, and older readers – even those who have long since outgrown picture books – will find the story emotional and moving.