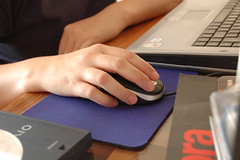 Uh-oh you haven’t updated your status in 5 minutes!

In the end, resistance was futile.

Since the minute Facebook stormed onto the scene a decade ago, I knew I did not want to get caught up in the hype. I began to detest all “social media,” not only as a regular person who found it tedious and self-serving but also as an actual journalist who saw the demise of the fourth estate. If anyone can say anything anytime, then who the heck knows if anything anyone is saying has any truth to it? But it was Facebook that caught the brunt of my wrath, as I watched otherwise sane people get sucked into this never-ending vortex of “status updates” and “likes” and “friends.”

A few months ago, though, I took a job with an online newspaper. To me, it represented the best of both worlds: It was online, and I was not naive enough to think that’s not how people were getting their information these days, but it was done by professional journalists with ethics and standards. And much to my surprise, I fell in love with how we used social media, particularly Facebook. All those years that I toiled away putting out daily and weekly newspapers with little feedback from readers, little idea of whether people liked what I was doing – poof, gone! Wiped away by the “comments” box on Facebook. How amazing that now I knew what people were thinking about my work and the work of my fellow online journalists. It didn’t matter if they were negative comments. Any feedback was appreciated.

And so, I started dipping my toe into my own Facebook page, which I had reluctantly created a couple years ago at the urging of my husband – not because he’s a Facebook fan, but because he insisted if I didn’t start one then someone else would, stealing my identity on Facebook.

Facebook can be the theater of the oversharers BUT can also be used for good: connecting communities with a common cause, and building meaningful support systems.

First I just updated my cover and profile pictures with some cute pictures of Noelle. Then I posted a few photos of my Brownie troop so their parents could see them. Then I downloaded the Facebook app onto my iPhone, making work-related posting easier but also making it easier to check my “news feed” (the name of which still curdles my journalist blood; hearing that you hate the rain today isn’t news by any stretch of the imagination). I tentatively accepted a few friend requests that had been sitting on my account for a year. I “liked” a few pages of local businesses. And began to feel like maybe, just maybe, Facebook wasn’t the monster I had thought it was.

What does this all have to do with raising a child with diabetes? Facebook has given me a support system that I could never dream of here in my rural corner of New England. Many of those pages I have “liked” are diabetes-related: JDRF and JDCA (Juvenile Diabetes Cure Alliance), where I see updates on trials and news about potential treatments and cures, as well as lighter fare like Diabetic Danica, a young woman with type one diabetes who posts videos and blogs about her life, providing humor and amusement to my little girl living with the same disease.

And last week, I took the biggest plunge yet: I joined a group of parents of type one kids, and after a few days of “lurking” and realizing there are people out there like me who are also terrified and angry about having to raise a kid with diabetes, I wrote my first post to the page. The post was nothing more than venting about the cost of diabetes and my fury at greedy insurance companies who are making hard-working families like mine poor with policies meant to to rip us off because we have no choice but to keep buying overpriced test strips and insulin and infusion sets and everything else that fills our diabetes closet… and within minutes, it received half a dozen responses from moms all over the country that they got it, that they were in the same boat, and they offered prayers and suggestions and sympathy. — How awesome is that?!

I know I’m late to the Facebook party, but I’m so happy that I have figured out how Facebook can work for me!

Pittsfield native Rebecca Dravis is a former journalist who lives in north Berkshire County with her husband and daughter in Williamstown, MA. In Just My Type Rebecca shares her experiences as a parent raising a child with type one diabetes. – Check out Just My Type on the third Monday of every month.

What is Type 1 Diabetes: Type 1 diabetes (T1D) is an autoimmune disease in which a person’s pancreas stops producing insulin, a hormone that enables people to get energy from food. It occurs when the body’s immune system attacks and destroys the insulin-producing cells in the pancreas, called beta cells. While its causes are not yet entirely understood, scientists believe that both genetic factors and environmental triggers are involved. Its onset has nothing to do with diet or lifestyle. There is nothing you can do to prevent T1D, and-at present-nothing you can do to get rid of it. [Source: JDRF]

← Literary Guide for Mordicai Gerstein’s “The Mountains of Tibet”
The Berkshires are Alive with Live Theater Opportunities this Summer! →