The Good Life: Small Hardships Swept Away by Joyous Enthusiasm

For the Kids: Summer Travel 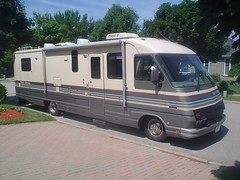 The RV: Liberation for some. Captivity for others.

Like some families, I am traveling with mine this month for summer vacation. We started in Albuquerque with the five of us, my father-in-law, and an RV.  This is not a trip I would have imagined taking prior to my married life.  The mere suggestion of such a hideous vacation would have sent my snobbish idealism into overdrive. A lot has changed since then. When my kids were little, my friend Kristie wisely advised me to plan our trips around them.  She said, “When they’re happy, you’re happy.” She also told me to wear elastic pants so I could go to the bathroom one handed while holding an infant in the other (Namaste, my dear friend.  Namaste).  On day eleven of our 23-day trip, I’ve decided to write about hardship.

The RV was really fun for the first three days.  It was a little like playing house with its mini refrigerator, tiny shower, and fold-away sleeping arrangements.  We cooked, we cleaned, we hiked.  We drove northward toward Taos, fed apples to semi-nomadic horses my 6-year–old affectionately named “Blackie” and “Brownie,” and camped near babbling streams.  I imagined pioneers heading westward toward their futures, and began reading a book titled Empire of the Summer Moon: Quannah Parker and the Rise and Fall of the Comanches…  We ventured onward and higher, well past 8,000 feet in altitude, and my head started to spin while my heart knocked hard against my chest.  I drank bottled water along the way wishing I were home in bed; Comanches were known to drink the contents of a dead horses’s stomach in the event of thirst while moving entire villages through the mountains. 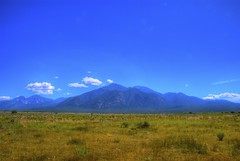 The expansive landscape of Taos, New Mexico  with its welcoming high altitudes and its pioneering allure.

One day we spotted a lone bovine calf, lying in the grass as we hiked, no mother in sight.  He was starving.  My son couldn’t stop thinking about it, and reassuring himself that, “the calf’s mother will be right back, she just had to do something.” We turned back down the trail.  We all wondered about his mother.  We left a note for the Forest Service which reassured our 6 year old beyond measure. We later stopped in Cimarron, New Mexico for dinner at the historic St. James Hotel, formerly visited by Jesse James, Doc Holiday, Annie Oakley and many other famous and infamous characters.  We learned that 26 people were brutally killed there in saloon brawls over the years, and one poor soul still haunts room #18, an eternal fate I hope to avoid.  My kids were spellbound.

We searched for remote campsites on National Forest roads in the summer darkness, and hoped the Forest Rangers wouldn’t mind.  I worried that they would shine their flashlights on us , and bang the doors ferociously admonishing us to move along—but to where?   My kids slept peacefully through the night, uninterrupted.

I finally started to see clearly just how small my hardships and worries really are when I see my children reacting, playing, living. My suffering fewer showers than I may have liked was immediately diffused by the waitress in a Gallop restaurant telling me how the waitstaff thought I smelled good (my 13-year old was mortified). The discomfort of our cramped vehicle was forgotten when my three young travelers erupted into peals of laughter after interviewing my youngest on the virtues of Goldfish (the cracker, not the pet).

The truth is, I really do have more fun when I forget myself and do things my kids like.  My hardships are barely perceptible in the scheme of things, caught up in their joyful enthusiasm.  So when my daughter asked me if I was sad that I didn’t go to the Vegas “Thunder from Down Under “(male strip show), I laughed to myself, loved her concern, and answered a sincere and heartfelt, “Ugh. NO!”  We all had frozen yogurt instead.