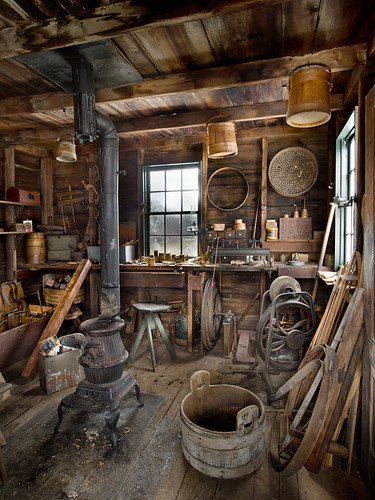 Hingham, Massachusetts., known as “Bucket Town” due to its prominence in the early New England coopering industry, was also the home of the first and largest community of professional toymakers in America.

Now through mid-January 2015, visitors to Old Sturbridge Village will have the opportunity to view artifacts from a recently-excavated workshop on the Hersey Family Farm in Hingham, MA.  The workshop spent a century undetected, hidden under vines on the historical farm property, before being discovered in 2008.  It had inadvertently become a time capsule, capturing the scene of an early twentieth century New England woodenware and toymaker’s workshop and lying undisturbed for decades.

The exhibit, Bucket Town: Four Centuries of Toymaking and Coopering in Hingham, is on view at Old Sturbridge Village’s Visitor Center Gallery for the next six months.  It contains objects from the Hersey Shop that have never before been seen by the public – an intriguing collection of tools, personal artifacts, and exquisite handicrafts – in addition to a generous selection of handcrafted toys and woodenware made by Hingham-based toymakers and coopers. 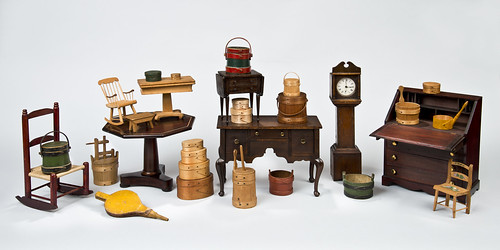 What exactly does a cooper do?  A cooper is a skilled tradesperson who builds wooden barrels, buckets, and other similar items.  In Colonial times, the containers that coopers built were used to store goods as diverse as loosely-packed fruit, wrought-iron hardware and tools, baking flour and gunpowder (packed in special barrels designed to be watertight), and even pickled foods in brine, fermented beverages like wine and beer, and even chemicals like arsenic (specially packed in barrels designed to contain liquids).  For many years, the only way to become a cooper was to serve as an apprentice to another cooper.  The recent discovery of the old Hersey Shop in Hingham is particularly exciting from a historical perspective because the town, located just outside of Boston, was nicknamed “Bucket Town” during the 18th and 19th centuries, when it served as the woodenware capital of the United States.  The “time capsule” of the Hersey Shop offers us a completely accurate representation of what the cooper’s workshops of “Bucket Town” were like!  And the toys on display in the exhibit, you might ask?  Where do they fit into this rich history of industrial New England?  As the fame of Hingham’s coopers grew, the coopers’ industry expanded to include a selection of miniature buckets and barrels that were sold as souvenirs.  These sparked the development of a booming toy-making industry in Massachusetts!

← Five Catalysts to Connect us with Community-Based Learning
Suggested Events for July 5th-11th, 2014 →