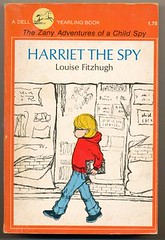 Now through November 30, 2014, the Eric Carle Museum in Amherst invites you to a special exhibition celebrating the 50th anniversary of author and illustrator Louise Fitzhugh’s 1964 book Harriet the Spy.  The exhibition will feature a selection of original drawings from both Harriet the Spy and its sequel, The Long Secret.  Eleven year old Harriet, the only child of wealthy New York socialites, wants to be a writer, and spends her afternoons secretly observing her friends and neighbors and recording her observations in a notebook.  The book helps readers explore themes of class, gender, and friendship in the 1960’s.

Harriet the Spy is now widely regarded as a classic children’s story – even more well-known and well-loved following its reincarnation as the 1996 film of the same name starring a young Michelle Trachtenberg – but, interestingly enough, when the book was first published in the mid-sixties, it received a good deal of controversy and was even banned by some libraries!  Compared with other children’s and young adult book characters at the time, Fitzhugh’s curious, independent, impatient, and tomboyish young protagonist challenged dominant social ideas about how children, girls in particular, could and should behave.  Many reviewers have since noted, though, that it is precisely Harriet’s fierce independence and desire to understand other people through observation that endears her to readers of all ages.  Her “bad” behavior is relatable, and a refreshingly honest portrayal of childhood, while her struggle to stay true to herself and her ideas in a world that doesn’t understand or appreciate deviance from the norm resonates deeply with readers on their own path to self-discovery.

Earlier this year, Random House released a fiftieth anniversary commemorative edition of Harriet the Spy featuring tributes by other noted authors Lois Lowry, Judy Blume, Meg Cabot, Rebecca Stead, and many more.  The commemorative edition also includes a map of Harriet’s neighborhood in 1960’s New York City and excerpts of correspondence between Fitzhugh and her editor.

From now through Monday, July 21, 2014, visit the Art Studio at the Carle to make a “Spy Journal” like Harriet’s!  This project is included with museum admission, and is a fun way to supplement kids’ enjoyment of the book and the exhibition of Fitzhugh’s artwork.  While Harriet’s secret notebook got her into trouble, the practice of recording observations about the world around us is a great way to learn about our environment and our culture.  Promote close observation skills and writing skills by encouraging your kids to spend some time each day observing their surroundings and writing them down.  Creating a “spy office” for kids to work in, or devising a secret code with which to communicate, are other great ways to supplement kids’ interest in the book – and inspire imaginative, educational play, sans screens, this summer. Check out Cryptology for Kids and Create Your Own Coded Language for ideas!