The Fire Cat
by Esther Averill 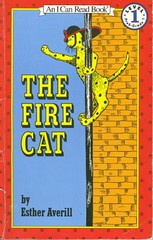 And Esther Averill’s The Fire Cat is exactly that.

A Harper Collins I CAN READ book, and originally published in 1960, The Fire Cat tells the story of a spotted cat named Pickles, who has big paws and lots of trouble figuring out what to do in life. After bumbling around a bit, and receiving help from the wonderful Mrs. Goodkind, Pickles is eventually adopted by a fire department, and learns to be a fire cat! He uses his big paws to do all sorts of fire cat jobs, and grows into himself more and more the longer he stays at the fire house.

While the educational value of such a story may not be as initially obvious as it is with some of the other stories featured in this series, it’s a rich tale filled with lots of opportunities to practice making inferences, creating text-to-self and text-to-text connections, and learning to use context clues in order to determine the meaning of words. The book is divided into three sections, and could easily be read over the course of a few days – allowing time in between each reading for families to reflect on what they’ve read and think about connections that they have to the story (from their own lives and from other readings). The book’s structure makes it an excellent early chapter book – each page is accompanied by fantastic line-drawn illustrations (which in themselves artistically command the building of inferences), meaning that young readers aren’t left with just text as in most chapter books. The structure allows this story, and many other I CAN READ books, to serve as a bridge between picture books and chapter books – readers must pay close attention to both the text and the illustrations, and cannot truly understand the story without full understanding of either.

While reading, families will follow Pickles through quite a journey. Though the idea of a cat working in a fire station is pretty silly, Pickles’ tale is somewhat relatable. Not only does Pickles struggle to find what he is skilled at (as many children do), but he struggles to become part of a community in which he feels he belongs – an experience that children will have numerous times throughout their lives. Thinking about the ways in which Pickles develops relationships and the role that those relationships have in his experience can be a valuable learning opportunity for children. Opening their eyes to the importance of consciously creating relationships can help children to become more aware of their role within the social framework of their classroom or neighborhood. This allows them to raise the level of consciousness with which they navigate interactions with peers.

Finally, in addition to teaching children about community, the story’s wording offers ample opportunities for young readers to practice their phonetic and phonemic awareness in order to read fluently. The book is not written in a style that is at all overly simplistic, yet it incorporates many familiar words (and many words that look an awful lot like familiar words) and ideas, allowing readers to decode with ease.

Designed for use with second grade students, the accompanying guide includes a thorough plan for introducing the story to students, and allowing them to use the book’s cover, summary, and title page in order to guess what the story may be about. In doing so, students will practice making inferences based on both textual and visual information, and will be ready to continue making inferences throughout the story. Additionally, the literature guide offers many suggestions for discussion questions that will encourage deep, thorough conversation – all stemming from a silly little cat named Pickles!