Celebration events invite families to celebrate the abolition of slavery, and to reflect on the daily aspects of freedom in their own lives 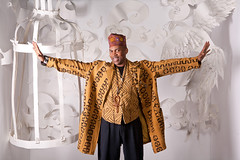 Andre Keitt will perform stories and folklore from the African oral tradition during Black History Weekend at Old Sturbridge Village on June 21 & 22, 2014.

These days, when a monumental government decision is made, technology allows the news to travel quickly and we are able to find out almost immediately. However, before the internet and telephones and even motorized vehicles were invented, information took a lot longer to travel. News could take days, weeks, even months to spread, and the further information had to travel, the longer it took for it to get there. In the case of the Emancipation Proclamation, for example, word of Lincoln’s granting of freedom to slaves in Confederate states took nearly six months to reach some parts of the country! While the Emancipation Proclamation was issued on January 1st, 1863, word of emancipation took until June 19th to travel from Washington, DC to Galveston, Texas!

The day upon which Texas slaves learned of the Emancipation Proclamation is celebrated today as Juneteenth. Originally celebrated only in Texas, the day has served as a commemoration of the ending of slavery in the United States since 1865. Across the country – and even around the world – Juneteenth is celebrated in order to honor the struggles of those who endured slavery, and to remind us of the ways in which our country’s history has affected (and continues to affect) our current society.

Families are invited to celebrate Juneteenth with ARISE, a rights and anti-oppression organization based in Springfield. Held from 5-8pm on Thursday, June 19th, ARISE’s Juneteenth event will take place at Hennessey Park and will feature food, entertainment, and activities for folks of all ages. Designed to be both an educational event and a community celebration, the ARISE event will also feature representatives from local non-profit organizations and community agencies, allowing the Juneteenth celebration to serve as an opportunity for community organizing and spreading valuable information and resources. Families attending the event should focus on the theme of freedom while they enjoy the festivities, and are encouraged to think not only of the freedom enjoyed by former slaves, but the role that freedom plays in our own lives, and the value of freedom to humans everywhere.

From some of Florence’s first activist community members to early Amherst residents doing jail time for saving a child from being sold into slavery, the stories convey the fear, uncertainty, and injustices endured even by legally freed African-Americans living in Massachusetts. Learning about the Pioneer Valley’s history with slavery and African-American rights can help children develop context for the information that they learn about the Civil War, emancipation, and our country’s prolonged struggle to create equality. Being able to put large-scale events into a local context, and to imagine them happening in familiar places, makes stories truly hit home.

Additional ways to observe Juneteenth will take place at Old Sturbridge Village on June 21st and 22nd. The village’s Black History Weekend will include inspiring and important stories from the late 1800’s (shared by professional storytellers), as well as opportunities to do crafts and other activities inspired by the culture and tradtions of African-Americans during the time period when emancipation took place. Located at 1 Old Sturbridge Village Road, OSV is open from 9:30am-5pm during Black History Weekend.

Families interested in celebrating Juneteenth within a cultural context familiar to the Gulf Coast African-Americans freed on the historic day can attend a zydeco concert at the Porter-Phelps-Huntington House Museum in Hadley on July 9th. Featuring the band Zydeco Connection, the concert showcases a musical style derived from Creole culture and deeply influenced by blues, R&B, and traditional Cajun music. Beginning at 6:30pm, the concert will take place in the museum’s sunken garden. The Porter-Phelps-Huntington House Museum is located at 130 River Drive in Hadley. Tickets are $10 for adults and $2 for children under 16.