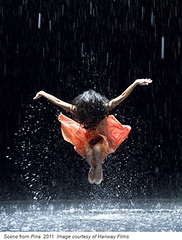 Amherst Cinema’s photography series – of films that explore the “works and worlds” of great photographers – presents an extra-special screening of PINA in conjunction with the Smith College Museum of Art. PINA is an Academy Award-nominated feature-length film by famed German director Wim Wenders in memory of modern dancer and choreographer Philippina “Pina” Bausch. Set to work together in 2009 on a film that would explore Bausch’s “thrillingly unpredictable,” sensual, playful dance pieces, Wenders continued to work on the film after her unexpected and untimely death that year. Featuring her choreography and members of her Tanztheater Wuppertal group, PINA is a monumental tribute to a unique, influential woman, and brilliantly showcases her contributions to the world. Viewers are drawn into the detailed, imaginative sets that Bausch created, including a stage covered with dirt; a cafe-like setup in which the performers dance with their eyes closed, bumping into chairs and tables; and a man-made waterfall. Inspired by Pina’s last words: “Dance, dance, or we are lost,” the film highlights the power of dance as a vital mode of expression. It has been lauded as a milestone in both dance and filmmaking.

Check out the featured trailer:

Drawing a connection between Amherst Cinema’s Photography Series and the current exhibition of landscape photography on display at the Smith College Museum of Art, Aprile Gallant, the museum’s Curator of Prints, Drawings, and Photographs, will give introductory remarks at the screening. Her expertise with photographs and works on paper will surely offer the audience a more nuanced “lens” through which to view the film, and to consider its significance both as a cinematic artwork and as a documentation of, and tribute to, a remarkable woman.

In addition to its value as a visual treat and a personal look into the lifework of a notable female artist, PINA could be used to supplement the study of dance, cinematography, photography, performance art, history and/or foreign languages. Rated PG, the film contains interviews and commentary in German, French, English, Spanish, Croatian, Italian, Portuguese, Russian, and Korean (with subtitles).