You’re Invited! Help halt the demise of these important pollinators! 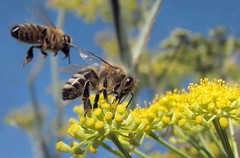 While our surroundings continue to bloom, take advantage of the late spring blossoms and the creatures that they attract by participating in some citizen science projects! Pollinator species of all kinds are declining in numbers as a result of environmentally unfriendly practices (like habitat destruction and herbicide use, among others), and by helping to collect data about pollinators, environmentally conscious folks of all ages can contribute to current efforts to support populations and ensure that they continue to exist for years to come.

In particular, families can use their citizen science efforts to help study populations of bees. Loved and celebrated for their role in pollinating some food crops that we enjoy, bees play a crucial role in ecosystems all around the world. This summer, instead of fleeing at the sight of a bee, families can practice photography skills, learn to identify insect species, and contribute data to studies of bee population distribution and the causes of population decline.

Bumble Bee Watch, a collaborative effort to track and conserve North American bee species, calls for citizen scientists to submit photographs of bees they’ve encountered, along with basic information about location and the species pictured. Though families will need to do some work in order to learn to identify bee species, the challenge is also a valuable learning opportunity. In learning the basics for identification, children will learn about insect anatomy, important physical characteristics, and the role that each unique body part plays in a bees daily life. And while it’s important to do a thorough job of checking photographs for details in order to identify accurately, each submitted sighting will be double-checked by a professional – so if you’re wrong, it won’t affect the study!

Of course, more important than proper identification is taking good photos. In order to identify, it’s important to see lots of detail – so the more detailed the photo, the better. There are lots of ways to take a good bee photo, and good photographs don’t necessarily depend on having a fancy camera. Families using basic point-and-shoot or smartphone cameras will get the best photos by exercising patience and staking out some bee-attracting blooms, like a newly-bloomed rhododendron bush or purple clover. Check out this video tutorial on how to submit to Bubble Bee Watch.

A second citizen science project calls for families to actually collect and study bees for a period of time before submitting data. ZomBee Watch uses citizen science contributions in order to track the effect that the parasitic Zombie Fly is having upon populations of honey bees. Confirmed as a bee killer in California, the Zombie Fly’s effects upon bee populations in other areas have yet to be confirmed. However, by tracking instances of ZomBees (bees affected by Zombie Flies), the scientists behind the project hope to discover some of the reasons behind the recent sharp decline in bee populations across the continent.

Not for those with weak stomachs, ZomBee Watch requires participants to collect bee samples, then watch to see if any maggots emerge from the bees’ soon-dead bodies. Zombie Flies use a special sharp body part in order to insert their eggs into healthy bees. As the eggs hatch, the maggots begin to eat the bees’ bodies – killing them from the inside. Eventually, the bees will die, and maggots will polish off their insides and emerge from the body in order to turn into flies – thus allowing the process to repeat.

In order to contribute to ZomBee Watch, families must first learn how to find bees that may have been affected by Zombie Flies. Such bees can often be found near light sources at night, or laying on sidewalks during the daytime. Bees that have been affected will not act like regular bees – close to death, they won’t fly away and are fairly helpless (don’t touch, though – they can still sting despite their weakened state). Citizen scientists can collect bees using tweezers, and can store them in clear containers for observation. If the bees have been affected by Zombie Flies, maggots will emerge in 5-14 days – so be patient! But don’t worry – if no maggots emerge from your bee, the data you’ve collected is still valuable. Sometimes, bees exhibit unusual behaviors and die for other reasons, and ZomBee Watch still wants to track these non-Zombie Fly instances.

In order to participate in either project, families will need to create their own log-in account. Use your own discretion when allowing children to log-in to websites – not only will they likely need help entering information, but they may also need help safely navigating the internet itself.