PARENTS’ NIGHT OUT: Music from Around the World with Zvuloon Dub System at the Iron Horse Music Hall in Northampton 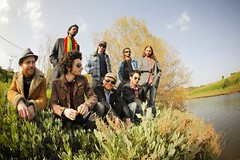 Enter for a chance to win one of two pairs of tickets we’re giving away to Zvuloon Dub System at the Iron Horse Music Hall in Northampton on Wednesday, June 11th, 2014 at 8:30pm. Deadline to enter: 6/8/14. Details below.

Zvuloon Dub System, Israel’s leading World-Reggae band, emerges from a multicultural middle-eastern music scene, singing in English and Amharic. ‘Anbessa Dub,’, the new Zvuloon Dub System project blends roots reggae within the context of the unique vibration of Ethiopian culture offering fresh versions of famous songs from the golden age of modern Ethiopian music together with original songs written by the members of the band. The project features several artists from the ‘BetaIsrael’ community (the Jewish Ethiopian community that immigrated to Israel during the 80’s and the 90’s) playing the music they grew up with, in their mother tongue. — www.zvuloondub.com

We’re giving away two pairs of tickets. Your chance to win a pair of tickets to see  Zvuloon Dub System at the Iron Horse Music Hall in Northampton, MA on Wednesday, June 11th at 8:30pm is easy & simple! To enter to win simply fill out the following and we’ll  randomly draw two winners from all who enter (one entry per household).

← The Ripple: When I Jump into Your Flow
Open Sesame: Craft & Storytelling Urge Us to Jump Into This Graphic Novel →