Posted on April 7, 2014 By Hilltown Families 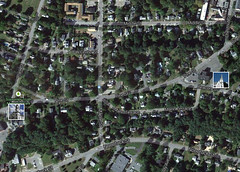 We’re rich in walking tours here in western Massachusetts, an excellent community-based educational learning activity families can do together. Unlike scheduled tours guided by interpreters, self-guided walking tours offer  lots of flexibility. Families can use walking tours as a way to expand on a subject that children learn about in school. Alternately, families can utilize available tours as a means of answering questions that they’ve stumbled upon together.

Spring is here! Alongside the longer days and afternoons filled with sunlight comes warmer weather, and as the out-of-doors draws us from our winter hibernation, each day brings opportunities to explore our community. All over western Massachusetts, community organizations have organized self-guided walking tours, helping to add a new layer to the discoveries made while meandering through a neighborhood or district. Using paper maps and brochures, as well as tech-y resources like QR codes and interactive tablet and smartphone maps, families can use a spring walk as an opportunity to learn more about the fascinating history behind buildings, monuments, neighborhoods, and communities as a whole.

Unlike scheduled tours guided by interpreters, self-guided walking tours offer families lots of flexibility – you can move at your own pace, begin and end whenever (and wherever) you want to, and pick and choose which sites and facts to highlight depending on your own interest (and children’s ages). Families can use walking tours as a way to expand on a subject that children learn about in school, such as the industrial revolution or the Underground Railroad. Alternately, families can utilize available tours as a means of answering questions that they’ve stumbled upon together – tour materials can provide background on abandoned buildings or strange landmarks, and can help to explain the size, structure, and socioeconomic status of certain communities…

To continue learning about African-American history, families can explore Sojourner Truth’s role in local history on a walking tour of Florence offered by the Sojourner Truth Memorial Statue Committee. Including nearly twenty different significant landmarks (including everything from churches and statues to mills and dams), the tour covers a slue of local history. This tour is particularly useful for slightly older students who have already learned about abolition – being able to actually see a local connection to such an important part of American history can have a huge impact on learners.

Further exploration of Florence and Northampton can be done using Historic Northampton’s A Visitor’s Guide to Paradise, a booklet filled with maps and background information for six different tours of the city. For just $5, families can acquire a copy of the 15-page booklet from Historic Northampton’s museum shop. Tours in the booklet include Walking With Sojourner Truth (Florence), Jonathan Edwards’ Northampton, a Calvin Coolidge walking tour, an adventure through the Bridge Street Cemetery, and examinations of downtown Northampton and its 300-year-old architecture.

In the Berkshires, the Upper Housatonic Valley African American Heritage Trail provides families with opportunities to learn about local connections to the abolition movement in 29 different western Massachusetts towns. Downloadable trail brochures cover historic sites all over the Berkshires, including:

Families can also listen to audio recordings that teach even more about the importance of each location on the trail – pair a recording or two with a map of local historic sites for a semi-guided tour experience!

In the Hilltowns, families can explore the lost-but-not-forgotten history of some of the smaller Hilltown communities. In Hawley, the Sons and Daughters of Hawley and the Hawley Historical Commission have worked to uncover the old town common, and a virtual tour titled Rediscovering Hawley’s Old Town Common teaches about the long-abandoned area whose history dates back to the early 1770’s. In nearby Plainfield, the Hidden Walls, Hidden Mills series five different tours that explore the town’s history through close observation of walls, cellar holes, and other interesting parts of the local landscape. By learning about each of the places included in the tour, families will learn all about Plainfield’s early history – the town used to be filled with much more industry than it is today!

Two Connecticut River communities offer tours that follow a similar theme to Plainfield’s Hidden Walls, Hidden Mills, but utilize technology in order to do so. In Turners Falls, families can utilize the QR codes of Turners Falls encoded to learn about the town as they wander through it. Scan-able codes located throughout the town can be read by smart phones in order to access information about the location’s historical importance. Not only will families be able to learn about the lost and forgotten (and no longer visible) bits of Turners Falls history, but they’ll also learn about some of the town’s modern culture and happenings, too!

In Holyoke, families can use smart phones to access The Holyoke History Walk. Filled with more information than families can cover in a single tour (and available in both English and Spanish!), the virtual tour provides numerous opportunities to learn about the city’s history with industry, immigration, and economic depression, as well as some recent changes, too. Exploring the city can help students gain context for learning about the Industrial Revolution or the influx of immigrants that the United States saw during the early 20th century. A look at abandoned mills and other great buildings can, similarly, help students to understand how the country’s economy has changed, moving manufacturing to other parts of the world.

In the Berkshires, families can explore the milltown history of the northern city of Adams. The city’s Walking Tour of Park Street teaches families about the effect that the cotton mills of the late 19th century had on the development of the neighborhood, whose name comes from a park that was once located at the southern end of the street. Additionally, families can use the tour as an opportunity to explore the city’s more recent history regarding the neighborhood: during the late 60’s, citizens defeated a plan to raze the historic buildings, and during the 80’s, preservation projects helped to restore and revive the historic neighborhood.

After taking a few walking tours, you’ll likely be able to identify what makes for a successful and educational tour. Make a family project out of creating a walking tour of your own neighborhood! Young children can create a tour that highlights locations that are significant within their own lives, while older students could create a tour that teaches neighbors about the history of the homes and families that make up their neighborhood. If you make one and want to share it with others, ask your local librarian if you can share a descriptive map with library patrons.  If you want to include it in our list here on Hilltown Families, contact us at hilltownfamilies@gmail.com.