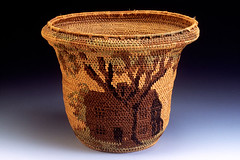 Sarah Cowles (1845-1922), a member of the Pocumtuck Basket Makers, wove an image of Deerfield’s iconic c. 1699 Old Indian House in her basket. Cowles was one of a number of women who was swept up by the William Morris craze for making handmade goods. Founded in 1902 by Madeline Yale Wynne, the group made baskets principally of raffia, a product of Madagascar, and used natural dyes to color their work. Wynne chose the name Pocumtuck to reference the Native Americans who first lived in Deerfield.

The early 1900s sparked a renewed interest in the materials and craftsmanship roughly associated with the colonial period in the United States.  Known in the US as the “American Craftsman” school of thought or as the “Arts & Crafts Movement,” this interest in traditional methods, materials, and styles of craftwork was part of an international design revolution against the mass-production that new industry and machinery had made possible.  The movement, which began in the British Isles in the late 1890s, was initially a socialist rejection of the mechanized, assembly-line-style work that had all but eliminated the creativity and skill that craftsmen (and women) had demonstrated prior to the rise of industry. By elevating the aesthetic significance of these unique, unassuming, artisan-made objects, the Arts & Crafts movement created a new niche for craftworkers and pushed back against the increasing sense of excess in the design world. Ironically, these humble objects inspired by craftsmen of old were not accessible to everyone. Because the materials, time, and skill needed to create high-quality, authentic arts & crafts objects were harder to come by than what the factories produced, each object was competitively priced.

Artists in New England were particularly drawn to the resurgence of traditional handicrafts, and many joined the arts and crafts community that had sprung up in Deerfield.  These artists – ranging from metalsmiths, potters, and furniture makers, to photographers, embroiderers, and basket makers – were heavily inspired by the history of the Deerfield area, and incorporated references to the town’s history in their work.  Several Deerfield artists even achieved national recognition for their crafts.  It is these artists and their work that Historic Deerfield celebrates in their current exhibition, “A Community of Craftwork,” on view now through February 2015.  The exhibition features over thirty objects from the historic town’s collection, and highlights the work of Madeline Yale Wynne, Cornelius Kelley, the Deerfield Society of Blue and White Needlework, and the Pocumtuck Basket Makers: all residents of Deerfield during the Arts & Crafts Movement.  Visit the exhibition to see how their work drew on the themes of colonial life and Deerfield’s rich history – while remaining attractive to 20th-century standards and consumers.

Parents and teachers seeking ways to supplement their children/student’s interests and education should pay special attention to this exhibit because it raises important questions about a diverse range of issues:

This exhibition also highlights the notably high number of female artists in Deerfield that received recognition for their craftwork, including Sarah Cowles and Madeline Yale Wynne.  The extensive profiles of some of these female artists can easily be applied to supplement women and gender studies in addition to art history and local history studies!

In addition to examining the relationships between politics and art, American history and women’s studies, this exhibition can help students develop a sense of connection to the experiences of the twentieth-century inhabitants of Deerfield.  By learning about the artisans who created the works on display, students will be able to draw comparisons between their own lives and those of the artists.  How have popular ideas about originality and authenticity in art and production changed and/or remained the same over the past 100 years?  By framing the political significance of the international Arts & Crafts movement in a present-day context, students can consider the impact of rejecting mass-produced tools and decorative objects in favor of traditional, “old-fashioned” iterations.

The philosophy of “truth of materials” and seeking authenticity in creation and craft still rings true today in many contemporary subcultures: for example, the recent stereotype of the “hipster,” a twenty-something liberal arts college graduate with eccentric facial hair and vintage clothing who loves coffee and prefers to listen to music on vinyl records, embodies the Arts & Crafts Movement’s emphasis on a return to older styles and traditional types of materials (i.e. vinyl, vintage clothing items, even the handlebar mustache).  While the hipster is often derided by older generations, younger students who see these characters on TV, online, or in their communities are often inspired by their “unique” take on fashion and lifestyle choices.  Instead of working for a corporation, hipsters create start-ups and cooperatives.  They challenge conformity in favor of quirkiness.  The hipster’s preference for buying locally-roasted and brewed coffee, too, is a nod to that same ideology: that that which is handmade, in small batches, by someone in your community, is more valuable than a mainstream or mass-produced iteration of the same thing.  The Pioneer Valley, circa present day, is somewhat of a mecca for young people who resemble this stereotype.  One could infer that the area has been a haven for those who value traditional craftsmanship and community for decades – since the early 1900s at the very least!  Drawing connections between the hipster quest for authenticity and meaning in an overwhelmingly mass-produced economy and environment, and that of the 20th-century Arts & Crafts movement, is a great way to illustrate the significance of the movement – and the longevity of its philosophies!

Of course, examining contemporary stereotypes about young people isn’t the only way to get kids interested in local history.  In addition to this exhibit, Historic Deerfield offers historic house tours (some of which are guided and scheduled), arts and crafts projects (including craftwork projects like molding ceramics and woodworking!), and other special activities that give students an opportunity to immerse themselves in historical learning experiences while having fun.  And for those unable to visit Deerfield in person, or who are simply interested in learning even more about the community behind the 20th-century arts & crafts movement in Deerfield, the Memorial Hall Museum has extensive resources available on their website. Check out their online exhibition about the arts and crafts movement in Deerfield, then use their collections database to search the museum’s holdings for items dating from the time period!